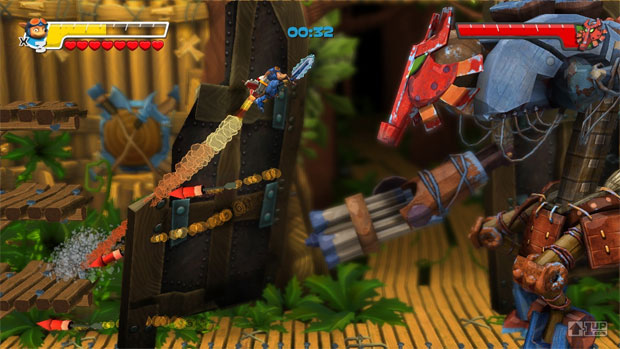 Seriously, Konami? You’ve just gotten around to doing this?

Despite having already revealed Rocket Knight to 1UP weeks ago, Konami has seen fit to announce Rocket Knight yet again, having finally decided that we lowly lesser press are worthy of a press release. You’d be amazed how often this happens, where publishers seem to assume that gaming sites don’t read each other and that nothing has officially happened until their almighty press release arrives. Did Konami really believe that nobody outside of 1UP had heard of the game yet?

They didn’t even send us any f*cking pictures.

Maybe we all dreamed the original announcement weeks ago, and this is some sort of premonition being made real before our very eyes. I guess if you somehow had no idea that a new Rocket Knight was coming, you can now be astonished at the confirmation of this brand new XBLA/PSN/Steam game. The rest of you, at least try and act surprised.

“Konami’s classic 2D action platform titles have a legacy of being well received and enjoyed by gamers worldwide,” said David Daniels, Director of Marketing at Konami Digital Entertainment Inc. “So it was only natural that we bring Sparkster, our favorite opossum hero, to next generation consoles with a combination of elevated graphics, all new environments and of course, the signature rocket action gameplay.”

In Rocket Knight, players take on the role of a fiery opossum named Sparkster who returns home to the Kingdom of Zephyrus after 15 years to find it in shambles. Using wits and a trusty rocket pack, players must steer clear and overcome a hostile wolf army looming to take the lives of the Zephyrus people. A 2.5D action adventure title, Rocket Knight brings expansive new worlds, each with massive platform levels and a rocket flying level. As players navigate through the challenges, their rocket pack can be used to ricochet off walls, launch Sparkster through obstacles and enemies in his way, and rocket drill through weak walls to create new passageways. Along with burst projectiles that shoot from Sparkster’s sword to attack distant foes, a burst vortex can also be created from players’ rocket pack to repel enemy bombs back at them. If all else fails, players can use Sparkster’s prehensile tail to hang from and slide down rails in order to avoid danger. With timed levels and leaderboards, dedicated players will also be able to show off their high scores and fastest times online.

Rocket Knight is rated E for Everyone by the ESRB and will be available for download in 2010 for Xbox LIVE® Arcade, PlayStation®Network and Steam. For more information, please visit https://www.konami.com/downloads/.