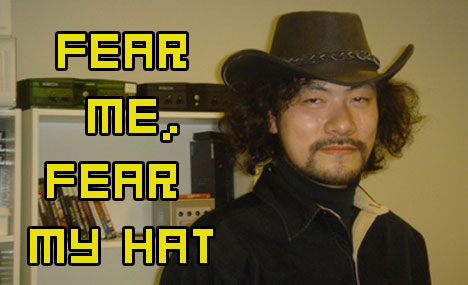 My first encounter with Koji Igarashi was at E For All in 2007. Dale North and myself were at the Konami booth trying to control ourselves from buying every Silent Hill shirt available to us, and I looked up and saw a Japanese man wearing a leather hat and rocking that kind of style that tends to leave Westerns baffled.

He also happened to be standing next to Akira Yamaoka, the composer for all the Silent Hill games, and I’ll be honest: between the two of them, I was a little starstruck. If you don’t know Igarashi, he is the series producer for Castlevania, and one of the few big names in the industry who still champions 2D, making retro fans everywhere just a little bit happier.

In a recent interview with Gamasutra, Igarashi spoke a bit about the future of Castlevania, commenting on the state of 2D on the DS and how the series may evolve:

“This time, I announced a DS title, but I definitely want to grow the franchise. It’s something I’m really focused on. You guys will probably be hearing something from me.”

We have had a conversation about this topic on RetroforceGO! about our love for Castlevania and whether we felt the series needed to evolve. The general consensus was that as much as we love it, we do want to see it change in some way, but the hard part was clarifying where we might want it to go. Do you want to see it change? If so, in what ways?