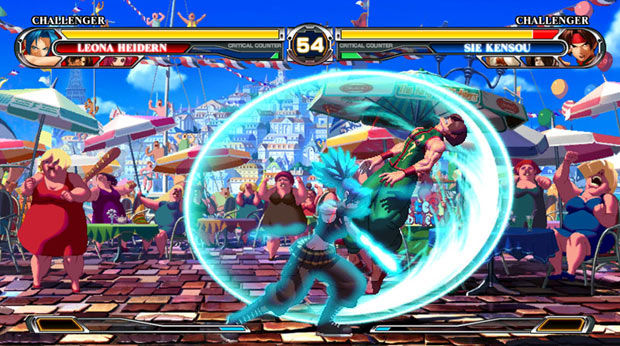 Well it’s about time. The Xbox 360 version of King of Fighters XII has finally been patched to fix its various online troubles and stability issues. Its PS3 counterpart was issued some time ago, as it didn’t have the red tape and nonsensical certification hurdles, and this should bring the 360 version up to speed.

The patch addresses everything from matchmaking and chat restrictions to response time and lag issues, so hopefully whatever was broken before will be kosher from now on. Let’s hope nothing slipped between the cracks, lest we wait through another several months of Microsoft hoop jumping for it to be fixed.

The update is live now, so if you found the game less than playable online before, it might be worth giving another shot. Hit the jump for all the details in the official press release.

October XX, 2009 – Today SNK PLAYMORE released a new online update patch for the award-winning The King of Fighters XII that fully addresses previously known issues to help optimize online gameplay on the Xbox 360® Video Game and Entertainment System from Microsoft.  In addition to the optimization of online matches, this patch also fixes a variety of in-game issues including specifications to the tallying of TrueSkill points in a ranked match, correction to movements of specific character combinations and/or match-ups, and specifications related to in-game chat capability restrictions.

This update places greater importance on the game’s response time by changing the way game data is processed and synchronized during online matches.  These changes provide players a stable gameplay environment regardless of specific internet conditions resulting in a smoother more intuitive experience.  The update also prevents players from experiencing slowdown during an online match when connections are less than optimal.

“The King of Fighters is one of the most popular fighting game franchises of all time,” said Shinya Morishita, SNK Director of Japan and US Relations.  “SNK PLAYMORE and Ignition Entertainment have worked together very closely to ensure that we have addressed all gameplay concerns.  We are both committed to supporting quality products and are excited to announce the release of this new gameplay update which allows our fans to continue to enjoy The King of Fighters XII.”

SNK PLAYMORE would like to apologize for any inconvenience or trouble they might have caused to fans of the The King of Fighters.  SNK PLAYMORE strives to improve the system of quality control for this title and all SNK products.  SNK PLAYMORE asks for your kind understanding and looks forward to continued support from its loyal fans.

The King of Fighters XII features four gameplay modes, new gameplay elements such as Critical Counter Attacks, arcade-style online lobbies, a worldwide online ranking system and more.  The 22 hand-drawn characters include favorites from earlier The King of Fighters including Kyo Kusanagi, Athena Asamiya, Terry Bogard and Leona Heidern.  Additional information about the game can be found at the game’s official website: www.kingoffighters12.com, on Twitter: www.twitter.com/KOF12 and on Facebook: www.facebook.com/kingoffighters12.