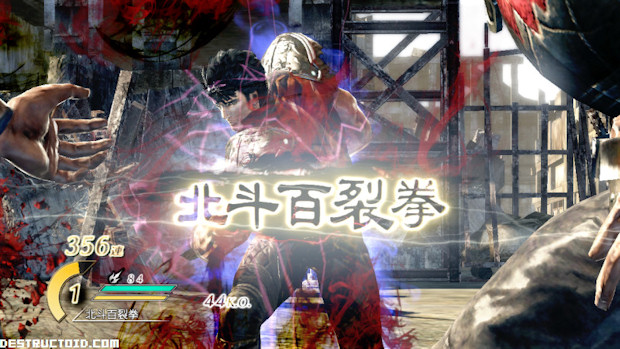 Yesterday we found out that Koei was giving Fist of the North Star the Dynasty Warriors treatment, and there was much rejoicing. Now, the very first screenshots have been revealed, along with leaked footage from Koei’s recent Japanese press conference, and I have to say that it looks surprisingly awesome.

Warriors games aren’t exactly known for their graphical brilliance, but this is looking like some of Omega Force’s best work, visually. The gameplay looks suitably violent and unrelenting as well, which is exactly what you want from a game based on the rather brutal Manga where people regularly explode.

Oh, and speaking of exploding people? Yes, Hokuto Musou friggin’ has them!

Hit the jump for the video (it’s got no sound and is somewhat poor quality, hence being below the fold) and hit our gallery for the screenshots. I am now officially pumped for this game. I’m going to have to go back and re-watch the old movie in preparation. ATATATATATATATATA!

On Wednesday, October 14th at the Akasaka Blitz in Tokyo, KOEI Co., Ltd. held a press briefing to announce details on a new project that was first revealed by a teaser trailer shown last month at the 2009 Tokyo Game Show.

The new project, entitled “Hokuto Musou” in Japanese, is based on one of the most widely-recognized manga and anime series of all time, “Hokuto no Ken” or “Fist of the North Star” as it is known in English.

On hand were the legendary creators of “Fist of the North Star”, writer Buronson, and artist Tetsuo Hara, who along with game producer Hisashi Koinuma, and Kenji Matsubara, president of TECMO KOEI Co., Ltd. introduced details about the forthcoming action game.

“Fist of the North Star” influenced entire generations of manga and anime creators for over 25 years, and established the tone for today’s action comics. The game takes place in the manga’s post-apocalyptic world where the remaining survivors of a nuclear holocaust roam the wasteland in an ongoing struggle against marauding tribes for food and water.

The game’s protagonist is Kenshiro, true successor to the Hokuto Shinken, a centuries old art of assassination. Kenshiro was bestowed the sole rights to the art, but when his elder brother Raoh, refused to give up the style, Raoh killed their master and left to raise his own army. Kenshiro is now searching for his beloved Yuria, but like a hammer of justice Kenshiro is forced to fend off rioting mobs, barbaric desert gangs and savage fighters. Ultimately Kenishiro’s journey will lead him back to Raoh who has set forth a path of vengeance.

Taking the role of Kenshiro, gamers will unleash a myriad of devastating fighting techniques and finishing moves powerful enough to bring down whole buildings. Channeling their energy into a single deadly blow, players can strike their victims and cause them to violently explode on screen. Gamers can also let loose with Kenshiro’s signature move- a ruthless flurry of ferocious punches, triggering the instantaneous breakdown of internal organs, and death.

Game producer Hisashi Koinuma promises to be faithful to the spirit of the original manga. The game’s story mode will follow the original series, while a second mode will introduce a completely new storyline.

The development team is also blending classic and original designs as they adapt “Fist of the North Star” to a three-dimensional, high-definition game world.

At the event it was announced that the characters of Kenshiro and Raoh would be voiced by Katsuyuki Konishi and Fumihiko Tachiki, respectively, and that a host of Japan’s most prolific voice actors would also  lend their talents to the project. Rising pop star Nana Tanimura, who appeared on stage at the event, is recording the theme song for the game.