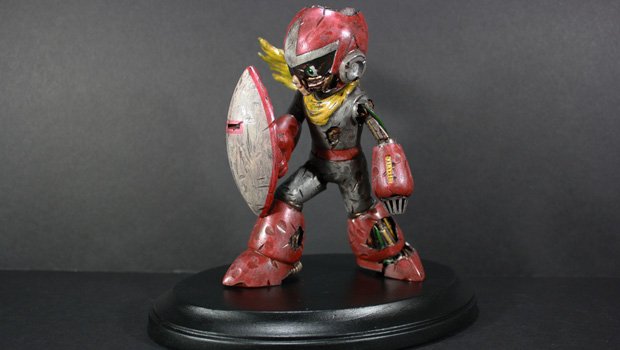 Donald “Kodykoala” Kennedy has a talent for turning harmless, inoffensive toys into concentrated nightmare fuel. He’s given us zombified Yoshi and Game Boy, a cutaway of Mega Man’s anatomy, and most frightening of all, a simulation of the typical Koopa family dinner. And it only gets more disturbing from there.

Back in August, Kodykoala constructed a battle-damaged Mega Man out of a Jazwares Retro Roto figurine. It was alright, but it doesn’t hold a candle to Proto Man‘s battle-weary incarnation. Ol’ Blues is making his last stand, shield at the ready, buster heavy at the side. Even with the odds against him, Proto Man is still a badass, willing to give his all to “a people that refuse to comprehend.” But what really sells the model is the visible eye underneath the shattered visor — the skin on that whole side of the face is gone, making the eyeball protrude more than normal. Freaky deaky!

You can find even more detailed shots on Kodykoala’s Flickr page. Check ’em out, homey!