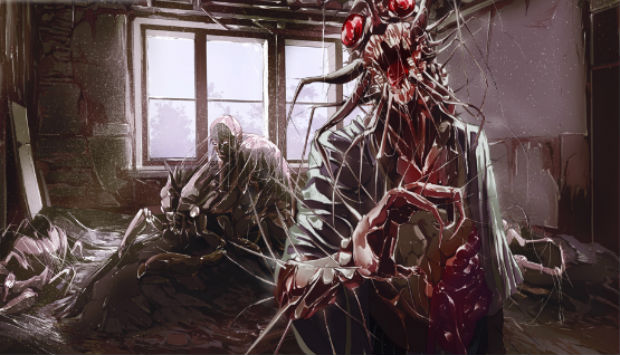 Kodoku Chronicles by Carnivore Games is a horror visual novel which focuses on the terror and dangers that lurk on Kodoku Island. In fact, you’ve probably already seen it before — Dale called it “groooooosssss.” I looked at it and squealed with glee. ‘Cause I’m depraved, I guess.

The game hopes to be a blend of traditional Japanese folklore and the works of H.P. Lovecraft. Expect gore and surrealistic horror aplenty as the protagonists move closer to the mysteries that Kodoku Island holds.

Combat mechanics are simplistic yet involve a bit of strategy. Players will have to balance their HP and luck stats to destroy monsters. Enemies will have weaknesses to certain spells which make up the mainstay of the player’s arsenal. Spells drain luck, which players can boost by spending HP.

The game is currently pre-alpha, with a basic version already running on several platforms. The developers hope to bring this game to PC, Mac, PlayStation Vita, PlayStation 4, Xbox One, and iOS.

You can back this game on Kickstarter or vote for it on Steam Greenlight now. In the meantime, I’m going to drool over these screenshots.