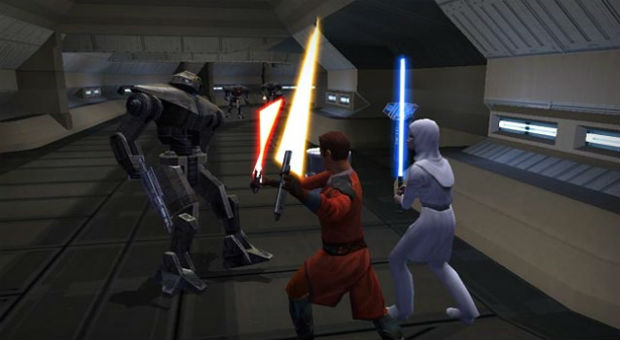 Your fanart and fanfics aren’t canon, either

That’s a nice extended universe you’ve got there, Star Wars. It’d be a shame if it were invalidated. Actually, that’s exactly what’s happening. Lucasfilm announced just that today via the official Star Wars blog, where it was decreed that games like Star Wars: Knights of the Old Republic and more of the many, many pieces of media inhabiting the Star Wars EU are now rendered non-canon.

“Lucas always made it clear that he was not beholden to the EU. He set the films he created as the canon. This includes the six Star Wars episodes, and the many hours of content he developed and produced in Star Wars: The Clone Wars,” Lucasfilm stated in the blog post, adding that the films are basically the groundwork of the Star Wars legacy. With George Lucas stating this time and time again, that’s hardly the surprising part of the announcement.

What’s surprising is this: “In order to give maximum creative freedom to the filmmakers and also preserve an element of surprise and discovery for the audience, Star Wars Episodes VII-IX will not tell the same story told in the post-Return of the Jedi Expanded Universe.” This statement effectively invalidates any and all material that falls into the EU category, with games, books, comics, and a staggering amount of other media included as well.

I mean, it’s not as if I’m hip to all the craziness that is the Star Wars continuity, but this kind of a movie is certainly understandable given the astronomical amount of content out there to have to wade through and adhere to when penning a new piece of Star Wars media. Lucasfilm president Kathleen Kennedy knows this has to be a major pain as well, as she’s hired a story group to coordinate Star Wars creative development.

Can you imagine your brainchild getting that large and that complex? Sometimes I can’t remember my NeoGAF username and password in the morning, let alone that Amidala’s name is Padmé. Oh wait. I don’t have a NeoGAF login because they’ve never approved me. In any case, how do you feel about this turn of events, Star Wars fans?