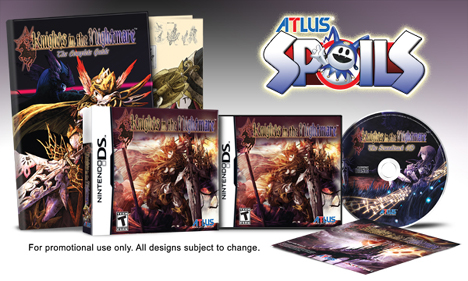 I’m really glad that Atlus is putting some kind of video tutorial together for their upcoming DS game Knights in the Knightmare. It’s not that the game is hard to play or learn at all, though. In fact, before the game starts, a very good interactive tutorial can be played through to learn the ropes. I’m enjoying the early stages of the game so far.

My problem is that I’m scheduled to review this game, and I know I’m going to have a bit of a hard time conveying how the battle system works. It’s one of those rare cases where it makes more sense to show than talk about. Now I can just link to these. Thanks, Atlus!

Under the jump you’ll find the first tutorial video, which just gives the control basics of the battle system, which is mostly done with the stylus. I feel that only after this video will the concept of a strategy RPG with shooting elements totally make sense, so check it out. It sounds like another video will be coming later, which makes sense, as there are many more game play elements to cover.

After this video, check out the game’s lovely trailer, which is also after the jump.