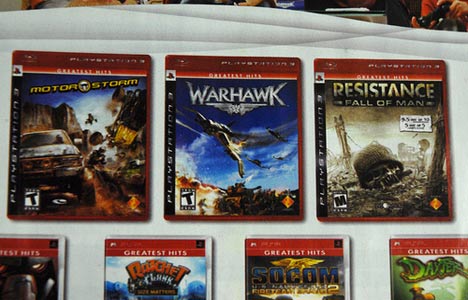 We’re still crossing our fingers that Sony will melt our faces off with a megaton announcement regarding Home, but something more likely to happen during Tuesday’s press conference involves some fantastic games that are about to get the “greatest hits” treatment. Nothing is official yet, but have ads ever let us down before?

I’m still a little heartbroken that Heavenly Sword isn’t among those pictured, but there are still at least two games on that list for new PS3 owners to get excited about. With Motorstorm being packed in with most PS3’s as it is, it’s hard to get all worked up over its inclusion in the ad.

Without a doubt, the most striking thing about the games lifted right out of Kmart’s Entertainment Guide has to be the packaging, itself — talk about déjà vu. No doubt, someone at Sony was either sighing in relief, or laughing hysterically  — Joker-like — all the while designing something that looks too much like an HD-DVD case.