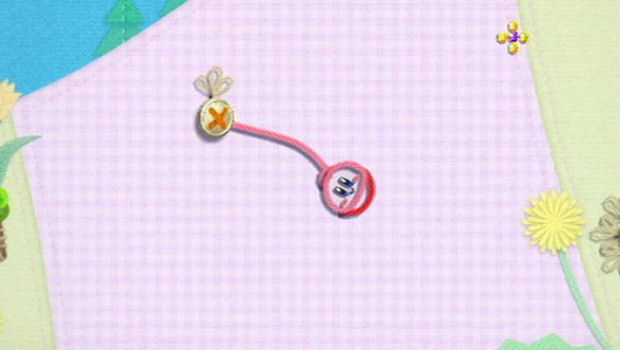 A new Kirby game for the Wii has existed in rumor form for years, but when Kirby’s Epic Yarn was announced at E3 2010, nobody could have expected that the titular pink lump was going to become a titular pink length of thread. How on Earth did that come about?

I got to speak to Nintendo’s Kit Ellis about the game, and put the question forth: Why is Kirby made out of string?

“The original idea came from the staff at Good-Feel, which was inspired by a stop-animation film made primarily with yarn,” explains Ellis. “With the ability for players to interact with the game’s environment, such as by unzipping the background panels, Kirby’s Epic Yarn is really in its own category as a platformer.”

Here’s the weird thing, though — nobody at Nintendo of America seems to know what the film is. I was told that one would have to dig around in Japan to find the movie, and even if one asked Good-Feel directly, they might not give you a straight answer. Nintendo of America is kindly trying to find the movie for me so we can share it, but until then, at least you know why Kirby is made of string!