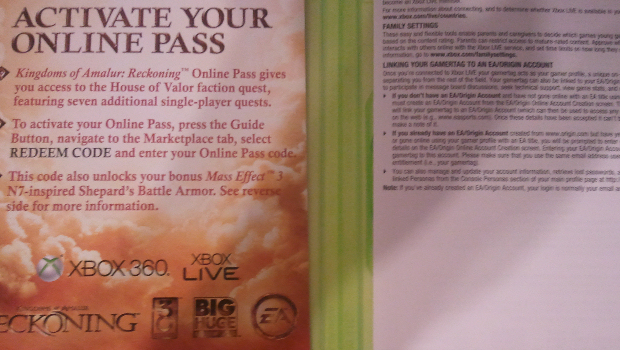 Kingdoms of Amalur: Reckoning is a single-player game, but that hasn’t stopped Electronic Arts from cramming an online pass into the game. We knew the pass was going to hide the game’s Mass Effect tie-in armor, but now we know that it’s holding seven full quests to ransom, too.

This is what greeted me when I opened my review copy, anyway. No manual or anything, just an online pass. Also, the code on my pass is currently invalid, so I cannot get to the content and see what it’s like. The sheet tells me I’ll get an entire quest line though, made up of seven individual quests.

It’s pretty sad that single-player games are starting to chuck online passes around. You know what that says to me? That a publisher is not confident that its game is worth keeping. That’s really not the kind of message you want to send your consumers before they even put the disc in.

It’s a shame, because Amalur might actually be worth keeping … but EA clearly doesn’t think so.