Andy’s Room is an absolute stunner. As the E3 demo for Kingdom Hearts III opened, I stood there for a moment, in absolute awe, at what Square Enix had created. Arguably one of the best, most colorful games I’ve seen, it took me a moment to realize that I was playing a game and not watching Toy Story 3. It was only when Buzz and Woody started to speak, their voices similar to the characters we know and love, that I came back down to Earth. This isn’t a movie, it’s a game. The horde of Heartless should have probably tipped me off to that.

My time with KH3 was spent in two stages of the game: Andy’s Room and battling a massive, two-headed monster on the side of Mount Olympus. Both stages were designed to show me how varied the fights will be in the final product as each featured a boss battle required unique gameplay to defeat. As different as these battles were in scope and design, they did share one thing in common: sloppiness. 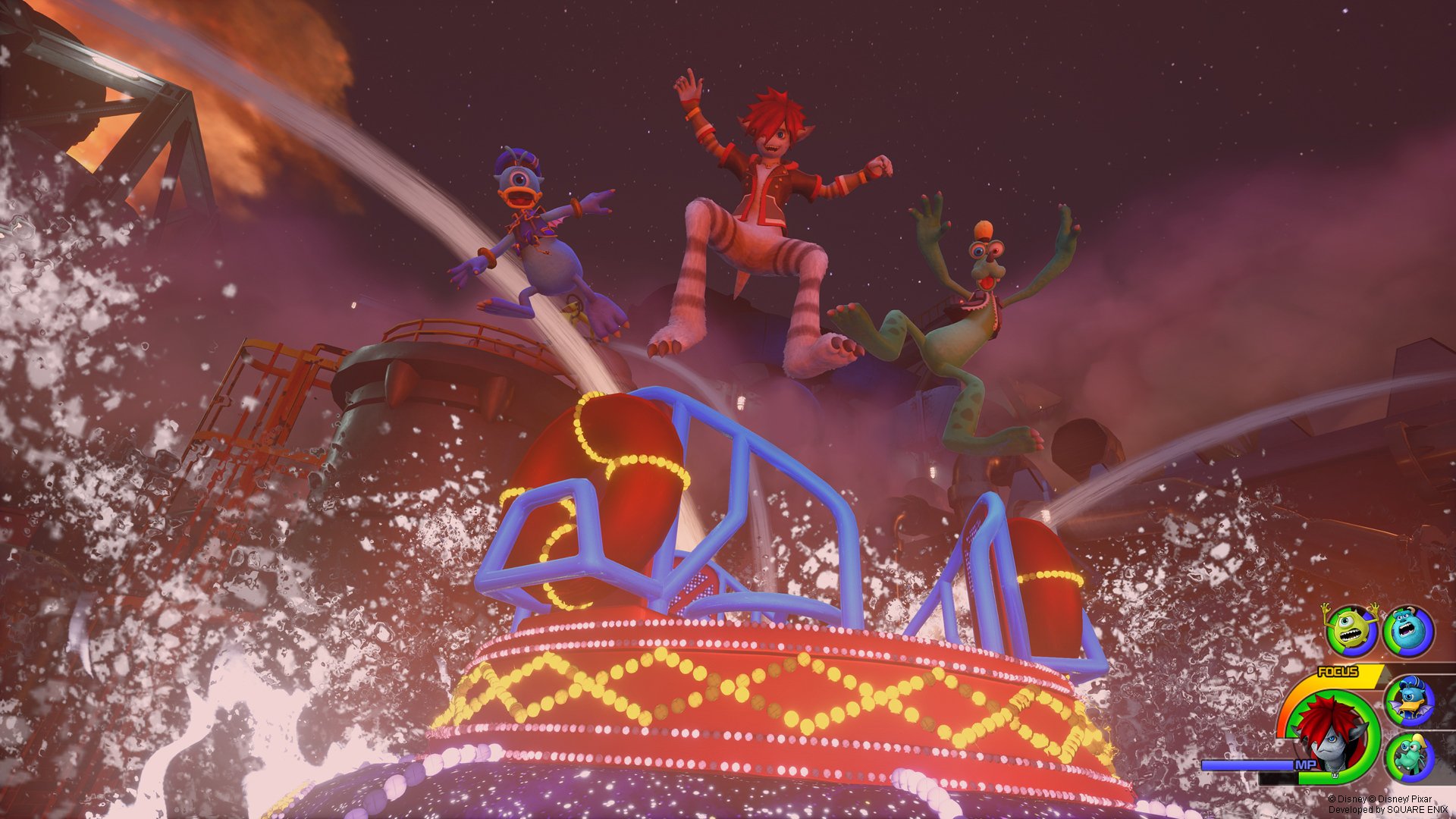 My experience with the Kingdom Hearts franchise is one of me trying to justify my love of it. I’m fairly new to the whole series having only played the majestic GBA title more than a decade ago before picking up the 1.5 & 2.5 pack for my PlayStation 4 last year. Once I finally got to play the main games of the series, I had a hard time figuring out what the hype was all about. It’s fun to see Disney characters in something as pseudo-serious as this, but there really isn’t anything fun about that combat; something that continues in Kingdom Hearts III.

Sora is quick and nimble, easily locking onto whatever enemy is closer allowing for fast one-button combos. It’s hectic in action, as it’s always been though somewhat more given the sheer size of the stages in KH3. These are big areas with battles that can be quite spread out. The end of these fights mostly wrapped with me tracking down that last Heartless playing hide-and-seek from Sora, Goofy, and Donald. Spells still break up the action, requiring me to use the directional pad to select the spell I want; a process that is slow and easy to screw up depending how flustered I am with the action taking place.

In my time with the demo, there really wasn’t a good way to get a full picture of the action taking place, something true of the entire series. But I was able to grit my teeth and make it through each madcap match in my march towards the bosses. On Olympus, my team had to chip away at the feet of the rock titan before running up its body and delivering some final blows to its head. Combat here is just as loose as everywhere else. The camera constantly clipped through titan’s legs, distorting the action. Running up the beast was at the same time intuitive and bewildering in how it’s handled.

After delivering several strikes to its head while also fighting the geometry of the monster, I activated a beautiful mini-game placing my team in an Electrical Light Parade version of the Big Thunder Mountain Train roller coaster car. Here, as I swooped around the boss, I had to aim for its heads and hands, shooting spectacular fireworks at it. On the Xbox One X I was playing on, there wasn’t a bit of slowdown or stuttering. The beauty of it was enough of a distraction from the fact this sequence went on for far too long in comparison with the rest of the battle.

The final section of the Toy Story world took my team to Galaxy Toys where the game changed from an action RPG to a first-person shooter. Piloting a little toy mech, I had to protect my team from other mechs activated by an Organization XIII member. The mech’s movement was swift and simple to grasp, but it also lacked a punch. Combat here is very much an extension of the rest of the game, something that is workable but lacking refinement.

Of course, none of this should matter to franchise fans. Millions are far too invested in the series now to turn back and so long as the combat works, which it does, it’ll be good enough to finish out this exhaustively long trilogy. As a third-person action RPG, Kingdom Hearts III falls far behind its contemporaries. As a piece of Disney fanservice, there really isn’t anything to match in gaming.

Kingdom Hearts III will launch January 29, 2019, for Xbox One and PlayStation 4.