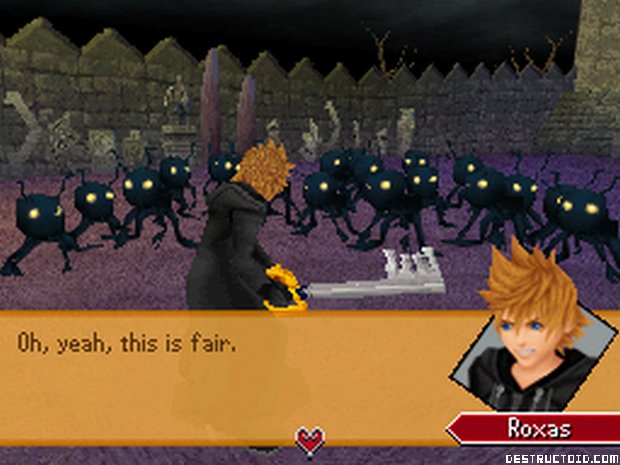 I played Kingdom Hearts 358/2 Days for a while at E3, and even the brief time I spent with it convinced me that it could be just as addictive as all the other Kingdom Hearts titles. The game will hit shelves on September 29th in the U.S., and it’s just been announced that all PAL territories will get it soon after, on October 9th. I’m sure European gamers are thinking how refreshing it is not to have to wait many months for a game!

There’s also some new screens too, which you can check out in the gallery. The story of Kingdom Hearts 358/2 focuses on Roxas from Kingdom Hearts II and his days as a member of Organization XIII. It may even clear up the questions about the connection between Roxas and Sora. This is also the first Kingdom Hearts game to feature co-op multiplayer, which is pretty cool indeed. We’ll bring you our review of Kingdom Hearts 358/2 early next month, so stay tuned if you want to know more before you buy!

With more than 12 million copies shipped worldwide, the KINGDOM HEARTS series is one of the most beloved RPGs in video game history. Disney and FINAL FANTASY® characters unite in a magical game world, engaging players across the globe with its gripping storyline and action-packed gameplay.

Larry Sparks, Vice President of Brand, Square Enix products comments, “The KINGDOM HEARTS series goes from strength to strength. With KINGDOM HEARTS 358/2 Days we are delighted to be revisiting these wonderfully unique worlds and very excited about the addition of a multiplayer mode. I am sure fans will find this another thrilling and essential entry in the series.”

-Twilight Town-
Roxas and Axel were watching the sunset from their usual spot on the station’s clock tower after a long day of collecting “hearts” from the Heartless, as ordered by their organization. When their daily work ended, they often spent their evenings there. They talked about the day’s work and other things over ice cream.

“Do you know why the sun looks red as it sinks below the horizon? It’s because among the countless colours comprising light, red travels the greatest distance.”

It was idle chatter between two boys without hearts.
This is the untold story of Organization XIII’s Roxas.

• World-renowned creator and character designer Tetsuya Nomura and his team once again unite the magical world of Disney with the characters of FINAL FANTASY, inviting fans to an enchanting gaming experience
• Multiplayer Mode – for the first time in KINGDOM HEARTS. Four players can team-up as their favourite Organization XIII members
• Fully 3D environments and characters, gigantic boss battles and an orchestral soundtrack push the Nintendo DS capabilities to the full
• A wide variety of missions to complete across a range of huge worlds. Lots to explore including Standard Missions, Trial Missions and multiplayer Mission Mode
• Limit Breaks! The special near-death ability from FINAL FANTASY VII is brought to the world of KINGDOM HEARTS allowing for explosive special attacks
• Panel System – organise your weapons, spells, abilities and even levels with this new system that makes you strategically think about what you can carry

© Disney. Developed by SQUARE ENIX/h.a.n.d.
Characters from FINAL FANTASY video game series: © 1990, 2009 Square Enix Co., Ltd. All Rights Reserved. DRAGON QUEST, FINAL FANTASY, SQUARE ENIX and the SQUARE ENIX logo are registered trademarks of Square Enix Holdings Co., Ltd. in the United Kingdom and/or other countries. NINTENDO DS IS A TRADEMARK OF NINTENDO. All other trademarks are the property of their respective owners.