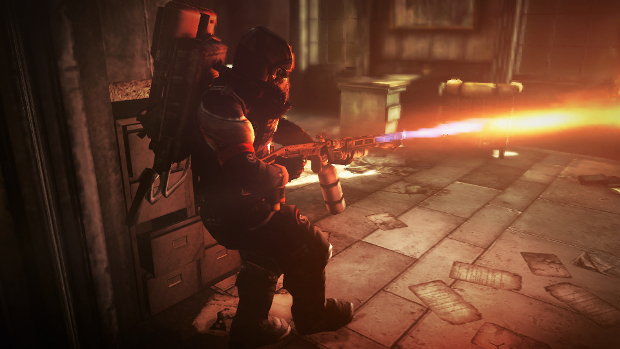 I initially scoffed towards every bit of this explanation of Killzone: Mercenary‘s multiplayer systems. I don’t much care for multiplayer, so why should I care that offline singleplayer progress yields weapons and stats that can go towards multiplayer? Well, while I may not care, it’s sort of a neat idea and could keep people playing Killzone offline, out and about, to abet their online performance. More important, however, are valor cards.

Mercenary does away with stagnant character rank systems, relying on daily “valor cards” which can be used to make fat stacks (of money). What’s more, in multiplayer you compete for valor cards. I immediately viewed this system in suspicion and disdain. Wouldn’t it just breed a cutthroat climate centered on a vacuous, false economy, perpetuating a Skinner box mentality of collection and constant score upkeep?

Then I saw a valor card spring forth from the corpse of a dead enemy combatant and something innate and animalistic inside of me screamed, “I want that.” I am going to skin you all alive and fashion your valor cards into ornate jewelry hung about my neck until I grow hunched under the weight of my trophies.

One of the first PSP games that spoke to me was Infected and its promise of virality, of being able to defeat someone in multiplayer fisticuffs and then have your player avatar infect and haunt their single-player experience. It was a cool concept executed poorly, but I love the maliciousness to it, the insult to injury. I don’t just want to kill someone in a multiplayer game. I want to take from them. Something precious. Man, I’m awful.

Killzone: Mercenary looks really good. The multiplayer is currently in closed beta. An open beta will begin at the end of August. I won’t seek help, but I will keep from slithering under your beds.