You want a first-person shooter on your Vita, right? Me too. Those dual analog sticks have been calling my name since the system’s release, but we’ve got nothing to use them with. And no, that other game doesn’t count.

Killzone: Mercenary swoops in to save the day with real, console-quality [I hate when people say that about portable games] FPS action. Those dual analog sticks? Put to great use with classic Killzone gameplay. Actually, everything in and on the Vita has been put to good use in this game, with everything from graphics hardware to the touchscreen working together to make what’s shaping up to easily be the best shooter on the system. 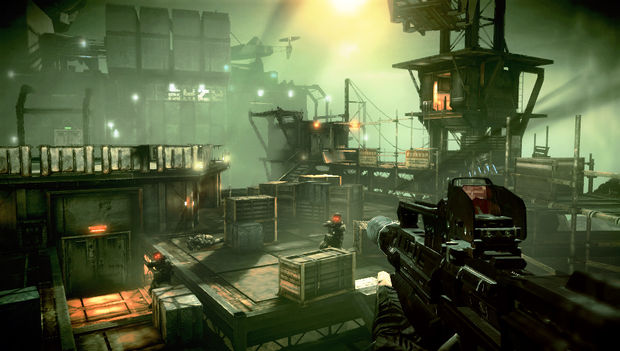 Wait, mercenary? Yep. As the name of the game clearly states, this Killzone outing is all about the cash and the mission. Alliances lie where the money is. You play as ex-soldier Arran Danner, and as a for-hire badass in a time and place where there’s a lot of surreptitious stuff going on, you’ve got plenty of prime work available. Expect to aid the Helghast and ISA during the course of this game.

The focus is so heavy on money that every single thing you do has a monetary value assigned to it. Kill a baddie and a number instantly appears, telling you how much is being added to your account balance. Kill in fancier ways (headshots, melee) and see that number increase. The better you play, the more you’ll earn. Even reaching checkpoints and knocking out smaller mission objectives dumps more into your account.

What’s neat is that all of the money goes into one account, accessible in both single- and multiplayer modes. You can buy the biggest and best gear in both modes, and they’ll all be available for use in both. The Van-Guard weapons system has some pretty nifty things to spend your money on, too. One of the options, the Iron Cannon, lets you call in a beam from orbit, letting you disintegrate enemies with a press of a button. Another, Mantis engine, lets you scout remotely to kill. 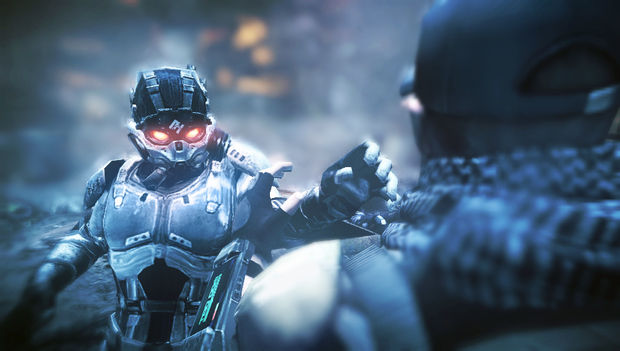 Despite the change in tone, this is a true Killzone game on a handheld. It looks and feels just like a Killzone title, running off a Vita-ized Killzone 3 engine. Compromises? I don’t see them. When you finally witness this game running for yourself, I’m certain you’ll be wowed. From both live gameplay and in example footage of various graphical effects, using everything from HDR to dynamic lights to volumetric fog, it’s clear that Guerrilla Cambridge is not jacking around when it comes to showing off what a high-quality Vita game can look like. There’s no one out there that is going to say that this doesn’t look good.

And in keeping with the Killzone-ness of it all, Mercenary is even set in the time of previous games. Series fans will find themselves in familiar situations, though the view will be quite different in playing as a gun for hire. The liberation of Vetka? You’re there. You’ll also play a part in the invasion of Helghan during the time of Killzone 2. 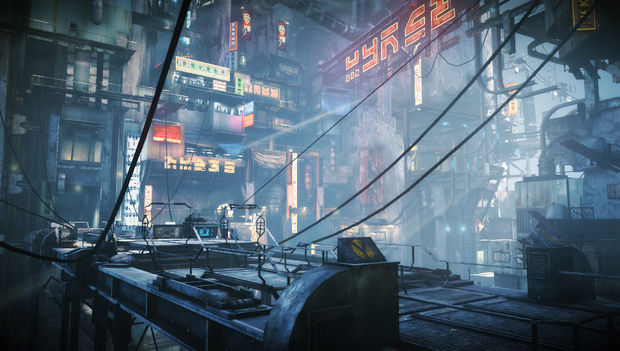 I played a bit of the single-player mission, which we’re told will last some 6-8 hours in total. My little piece of the action had me taking point on a mercenary mission called Lightning Strike, where it was my job to take control of massive arc cannons that were to be used to shoot an unsuspecting fleet out of the sky. It was a hacking mission — you know the kind. Run here, take out a wave, defend a point until the super futuristic space computer that should be fast but isn’t has time to hack something, and then rinse and repeat. Heavy defense from really solid AI enemies kept things interesting. Not necessarily groundbreaking stuff, but fun, and definitely good for showcasing gameplay that felt exactly like what I would be doing in a console Killzone.

Playing felt totally natural after I got used to the range of movement of the Vita’s analog sticks. With its console-ish looks and straight-up DualShock control, after getting into the zone, I kind of forgot that I was playing a handheld game. They didn’t shrink or lessen the experience, but instead perfectly translated it to something that just happens to be a more portable way of playing Killzone. Hats off to them for this.

There are some new Vita-ish aspects that have been added to the formula — Sony won’t let developers get away without at least some swiping. And that’s exactly what you’ll get in Mercenaries: touch input to do everything from throwing grenades to switching weapons. The rear touch panel will let you do things like zoom your sniper rifle in. 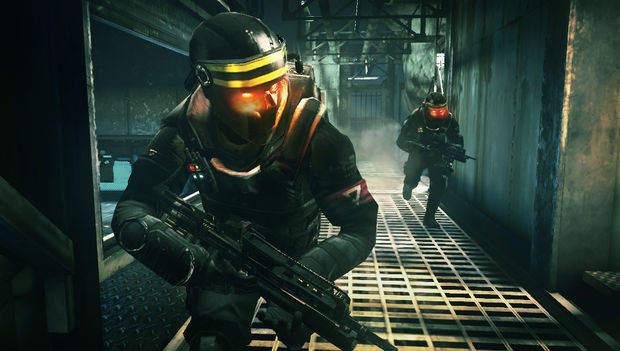 The Brutal Melee system lets you perform attacks with a swipe, too. After pressing the triangle button in close range, time slows down, and the game prompts you to swipe your finger a certain direction to kick off an animation of a head twisting or throat slitting. The input seemed sluggish, and I found myself frantically swiping everywhere to make sure my melee connected, sometimes getting crazy enough to find my fingers hitting the right analog stick and face buttons. It needs some fine tuning, but at least it looks neat. It also has an unintended bonus as it gives you a break when the action gets heated; it felt like no other enemies could hurt me while in the process of a melee attack.

Another Vita-ism might be less welcome, though I didn’t mind it. A touchscreen hacking puzzle ended up surprising me after finally hacking both stations and getting to the heavily guarded main terminal. Several hexagons with certain triangle segments missing had me poking at a selection of other hexagons on the side of the screens that could be a match. A countdown timer kept the pressure on as frantically I tried to match shapes. Again, I don’t mind these kind of hacking mini-games, but others looking for pure FPS action might gripe.

I didn’t get as much time with Mercenary‘s multiplayer, but it’s clear even from my limited look that FPS fans will dig this. This is big game multiplayer in a portable package. Four-on-four deathmatches in tight caves kept things hot, and drops to be used in the previously mentioned Van-Guard system turned the heat up even higher. 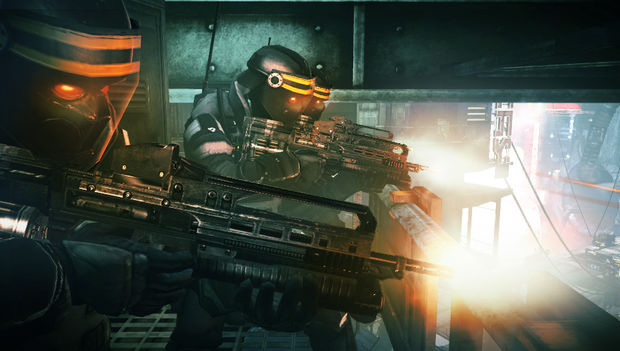 New to the MP system are Valor cards. Kill someone and they’ll drop a card, which represents their their class and rank. You’ll want to collect them all as they’re worth money, and there are also added bonuses to hoarding them.

Expect three modes and six maps for Mercenary‘s multiplayer in the end. Guerrilla says that it will be fully supported by Killzone.com, with leaderboard updates, heat maps and the like.

Multplayer moved at a nice clip, with a framerate that seemed to be suitably smooth. The same was true for most of the single-player mission I tried, though there were a couple of instances in tight quarters where a higher enemy count had rates dropping a bit. Some touchscreen commands seemed to lag a bit behind (get that grenade out now!), but nothing too serious. 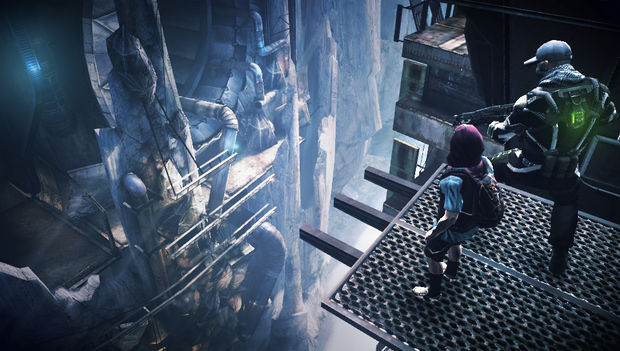 Hopefully this preview will hold you over as we have a really long wait until release: September 2013. And Killzone: Mercenaries was impressive enough that we’ll actually feel the need to gripe about this wait. It’s close-to-console looks really took me by surprise — seeing gameplay visuals displayed on a television didn’t look much different from a PS3.

For those worried about some of the Vita-specific features mentioned above, don’t. Aside from the melee attacks, which really aren’t that big of a deal, and whatever other hacking mini-games that may pop up, this is a proper Killzone title with classic FPS control.

Killzone: Mercenary looks fantastic and feels natural, has a sizable single-player mission and solid multiplayer, and isn’t compromised or rushed in any way. That’s all we’ve been wanting. Finally.