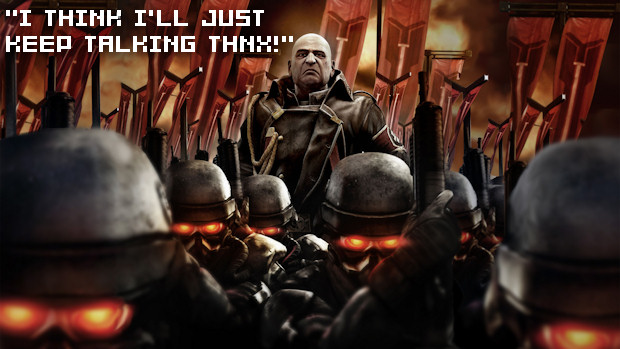 Those of you who downloaded the latest Killzone 2 update last week may have noticed that the patch, while welcome for its new ranks and exploit fixes, carried with it an unfortunate side-effect. The intro movie, at least for some people, is refusing to skip despite players hammering away on their controls.

I noticed this at the weekend, when I was trying to get my daily KZ2 fix but was unable to shut Emperor Visari up. The game makes a noise as if it’s acknowledged your controller input, but will keep playing the opening movie regardless, only skipping until several seconds after the Guerrilla logo has appeared onscreen.

We asked Guerrilla if this was a common problem or just my copy screwing up, but were informed via Twitter that we’re not alone. Apparently, this was not a deliberate attempt by Guerrilla to force us to look at its logo and the team is planning to resolve this rather irritating issue.

“We’ve had many reports of this,” states Guerrilla. “The QA team is aware of it and looking for a fix.”

That’s good to know. Life is too short to listen to Brian Cox screaming about the terrible vengeance he’s going to wreak on us. As much as I enjoy listening to a space Nazi with a Scottish accent, I still need to get that Air Support medal.