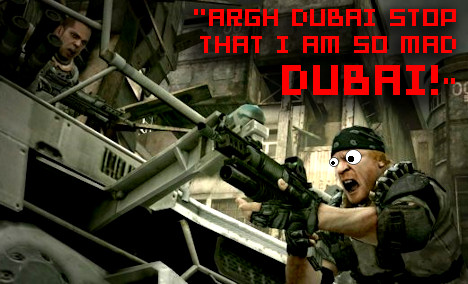 If you fancy getting your hands on Killzone 2 early, be aware that dozens of copies have been found for sale. All you need to do is hop on a plane to Dubai first. Yes, as with any high profile title, street dates have been thoroughly smashed, with one particularly lucky customer blowing the whistle.

“I couldn’t believe myself when I first saw it in a local videogame store,” said the happy Killzone fan. “It was Killzone 2 the full game. 2 weeks before the release date. The salesman told me that they managed to bring only 70 copies of Killzone 2, and they all sold out in just 5 hours…”

Early promo versions of the game went on sale via eBay, but as we discussed yesterday, those particular discs appear to have no online capabilities. So far, it would seem that stores in the US and UK have managed to keep a lid on the game that is causing chaos and misery on message boards across the Internet.

Obviously, Dubai is biased against Killzone 2 being sold on the proper release date. What a Microsh*tting fagtart.