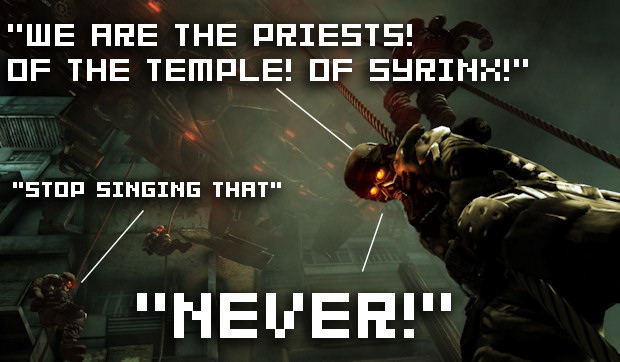 As I switched on my PS3 and waited for eight million years while the latest Killzone 2 patch downloaded, I wasn’t expecting much. However, after using my elite sniping prowess to lead my Helghast brethren to another glorious failure, I noticed that the mission point rankings had been increased, and three brand new ranks were ready to be earned. Lo and behold, I check the Internets to find that the patch has added new rewards.

The three new ranks bestow no in-game benefits, so there aren’t any fresh classes to uncover. They’re just a neat little extra reward for hardcore Killzone 2 players. The news of this was buried in the patch’s features list but hasn’t been extrapolated upon by Guerrilla until today. We now know that we can shoot our way to 100,000 points and earn the esteemed rank of “person with the most amount of time on his hands.”

In future news, Guerrilla is hard at work to make up for the lack of a “party system” in the game. They’ll be making it a lot easier to join up with friends and ensure you get onto the same faction as them, as well as improve the squad system and allowing players to keep in the same squad over multiple games.

Good things have happened and good things will continue to happen, it seems. That’s good, because I like good things. I think they’re good.