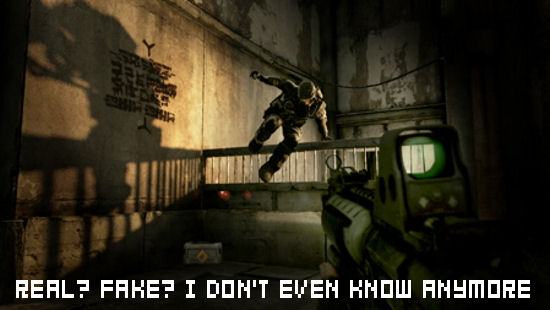 If you thought that Killzone 2 had been looking too good to be true, then it’s quite possible you were correct in your assumption. Developer Guerilla has admitted that the last batch of screenshots had been “touched up” to make them look better than they actually were. Bad form, you dirty boys. Bad, bad form.

Guerilla’s Seb Downie made the confession on the official PS3 forums, trying to justify the misleading promotional material by saying the enhancements were only small:

They are only the tiniest bit touched up. Short answer is yes. Long answer is that there was a little bit of colour-correction done and some minor polish, but nothing major. Still very close to reality and it looks better in motion in my opinion.

It’s worrying how obsessed with the graphics Guerilla and Sony seem to be with Killzone games, to the point of lying about them. Might explain why the first one had such disappointing gameplay. Stop trying to wave your graphics-peen around and actually concentrate on making a good game, please.