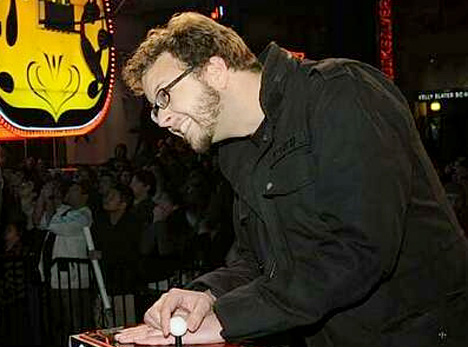 Seth Killian is the community manager at Capcom-Unity.com. I would have told you that in the headline, but I didn’t have room. Plus, I was on a roll with the whole alliteration thing.

I recently asked Seth a few Capcom questions that have been eating away at my brain since out last interview.  As always, Seth manages to say nothing and everything at the same time, dancing around my inquires with a style and grace I can only fantasize of someday possessing. That’s probably why he’s the community manager for the best videogame publisher on the planet, and I’m just the guy who gets paid to hassle him.

Hit the jump for Seth answers to my Mega Man 9 and Tatsunoko Vs Capcom related questions, as well as an epic dig at Mortal Kombat. Way to kick ’em when they’re down, Seth!

First I asked Seth what the chances are of Capcom releasing Tatsunoko Vs Capcom in the states with Marvel characters in place of the Tatsunoko gang.

It’s a fun concept, but that question seems to cross a few streams.  We know people are asking for the game and I’d love to be able to bring TvC to the West if we can solve the licensing puzzle.  As for the Marvel license, that deal only extends to the release of MvC2, and MvC2 alone.  Isn’t Tatsunoko already zany enough for you?
Yes Seth, Tatsunoko’s side of the roster are plenty zany, but if they are part of what’s keeping Tatsunoko Vs Capcom from being localized, then screw ’em.
Next I asked Seth about these proposed solutions to the “Mega Man 9 nugget” mystery that haunts Mega Man completionists to this day. I also continued to harass him about other ideas that fans have concocted to get Tatsunoko Vs Capcom to the US, like swapping out the Tatsunoko side of the game for other Capcom characters, indie comic characters like SCUD, etc.
His response-
“Swapping out” would be nice, but just ain’t as simple as it sounds.  First, these are fully rendered 3D models, not simply sprites (although just swapping sprites wouldn’t necessarily be that easy either).  Second, if you’ve spent some time with Tatsunoko, you’ll realize the characters’ moves are extremely detailed and based precisely on their backgrounds and anime/game histories.  The game is full of little in-jokes and references, and if you changed the character name, that would go from “awesome” into “meaningless pile of nonsense.”  Sometimes I wish we were Mortal Kombat and could just swap a different head on there and call it a day, but when you put in this level of detail, it’s hard to make easy changes.
And “nope, those ain’t it” on the MM9 secret. People are looking too hard, and also not hard enough.  That will sound ridiculous until someone figures out what it means, at which point it will sound profound.  Actually everyone already just hates this “secret” so I’m guaranteed to be hated in any event, but there it is.
I plan to keep bugging Seth about these and many of Capcom’s other unsolved mysteries, so stay tuned.