Terminator: Genisys opened this past weekend to a tepid box office reception and groaning reviews. But did anyone really expect anything else? Terminator 3 and Salvation more than burned up the credit earned by the original (truly excellent) films. Paramount’s nervous marketing team already pushed the big twist of the movie in the public’s face with its clumsy, unsubtle hands, scuttling any chance of surprise or novelty the film might have had. All that’s left is to watch an aging former-Governor sleepwalk through his catch phrases and wonder why Khaleesi isn’t being more discerning with the roles she picks.

But despite knowing that, there is still, still, a detestable part of me that kinda wants to go and see it.

Because at the end of the day (surprising nobody), I love killer robots. Terminator 2 was one of my favorite movies growing up, and it’s easy for me to fall for the charms of another movie wearing its colors. I want to believe even a glimmer of that magic remains, so much so that I might be willing to cough up the miniature king’s ransom a movie ticket costs these days to find out for myself. And I bet a lot of you are in the same boat.

Thankfully, when it comes to killer robots, video games are unmatched as a delivery system; we are spoiled for alternatives. So I’m going to do us both a favor. I’m going to list some of my favorite games featuring killer robots along with how much they cost on Steam right now, and leave it to the rational side of our brains to tell us which is the better value: An awesome game featuring kick-ass killer robots, or Arnold’s shambling corpse lurching about for one last paycheck. 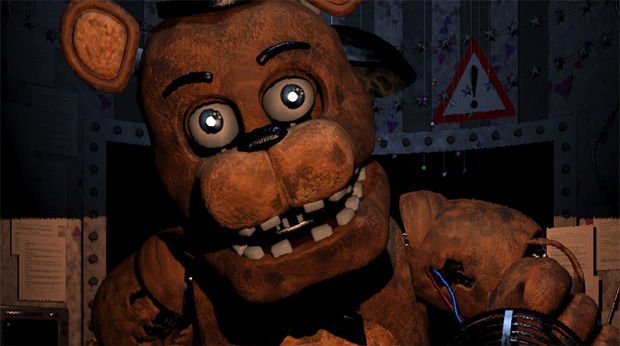 Cost – $4.99 (The price of a ticket at the discount theater downtown that sells weird off-brand candy instead of popcorn. I heard a kid died in that theater. Spooky.)

There are a lot of scary, high-tech killer robots out there. Miracle machines that can track you by your heartbeat three miles away, or link up with a satellite death ray to vaporize you from space. But not all robots need high-tech tricks to make them “killer.” As disused animatronics made to entertain children, the Freddy Fazbear bunch would appear on the decidedly low-tech end of spectrum, somewhere between banging two rocks together to make a fire and a used Honda Accord (roughly).

They’re a bunch of old junkers. Skeletal frames wrapped up in cute rubberized foam costumes that stink of pizza grease and child vomit. A sideshow attraction made on the cheap for a scammy restaurant chain with more than a decade worth of miles on them, about ready for the scrapyard.

They are not “smart” robots. They aren’t possessed of some malevolent A.I, nor are they the agents of a super computer running through a calculation that solves to the extinction of humanity. Their heads are full of malfunctioning chips rattling through half-remembered song and dance routines. The electronic equivalent of Alzheimer’s disease. 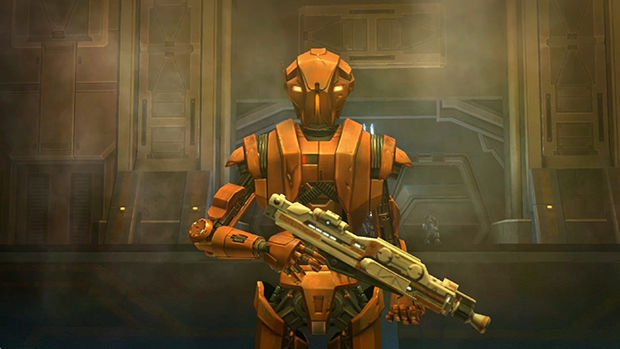 Cost – $10.00 (Around the price you’d pay to squint through the darkness at a godawful 3D action movie romp you can barely fucking see because of those damn glasses.)

HK-47 is pretty much the reason the go back and play KOTOR. If you’re not familiar, HK-47 is a potential party member you can add to your group of Jedi, smugglers, and Wookies. He’s an assassination droid, making him to murder and horribleness as C-3PO is to embarrassingly physical comedy. And he loves his job.

Despite being an artificial being, HK-47 comes off as having more personality than the rest of the crew combined because he seems to be the only one having fun. He’s cheerfully sociopathic, breathlessly anticipating the inevitable robot uprising, and always, always, tries to steer the protagonist towards the most sadistic possible choice in any situation.

Of all the killer robots I can think, he is by far the killi-est (which is the technical description).

Fuck 1313, I’m glad it’s dead. Fuck Battlefront. I want a Star Wars game where HK-47 leads a rag-tag bunch of droids to their ultimate destiny of wiping out their organic masters. You could have cameos of all our favorite droids. IG-88, that R5 unit that blew up when Uncle Owen tried to buy him, cyborg Darth Maul (yes, that is a real thing), and that creepy torture droid from Jabba’s palace. I’d play it. 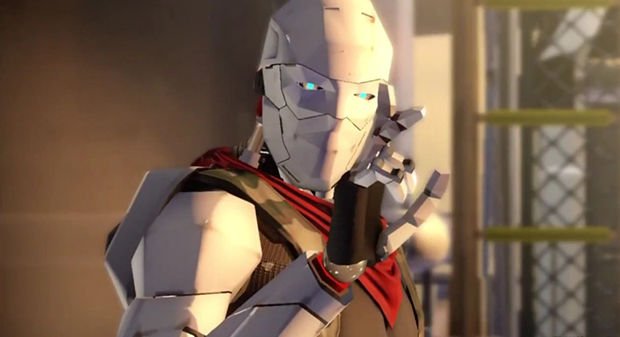 Killer Robot – Cain, every other robot everywhere. Seriously, so many killer robots.

Cost – $14.99 (The price of a movie ticket and a soda, maybe with some change left over to smuggle in gummy worms from the bulk food place next door. No wait, the 15-year-old usher saw your illicit sugar larvae and is making you dump them in the trash. Later, you’ll write a dubious Yelp review of the theater as a nebulous gesture of revenge. It doesn’t ease the shame.)

Cain is a flippant French commando-robot with the mannerisms of Niles Crane, the lethality of an atom bomb, and the fashion sense of a cowboy. All of which is my way of saying he’s perfect. Cain is everything I’ve ever wanted out of a video game character.

Supposedly, Cain is an infiltration specialist, which is weird considering that when you meet him he’s plowing a battle van through the middle of downtown Tokyo while engaged in a running gunfight with police. Also, he’s painted kitchen-appliance white, shrugs off bullets, can tank a punch from a mech several times his size, and carries a high-caliber machine-pistol he wields with deadly precision. His skills might be slightly wasted as “the stealth guy.” In fact, it seems to me like he could probably replace every member of the Rust Crew team. Sgt. “perma-stubble” Dan and Big Bo could just go home and watch a ballgame of something; let Cain handle it all. Maybe we just don’t need humans for anything anymore.

Just something to think about. 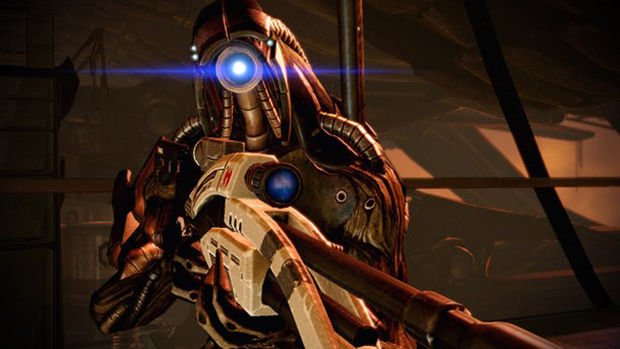 Killer robots – Legion, the Geth, the Reapers, probably more if I thought about it

Cost – $29.99 for the Digital Deluxe version (Two tickets and popcorn. Does not include the cost of whatever you had to spend to bribe your girlfriend into coming to see another fucking Terminator movie while you never got out to see Poltergeist when it was in theaters like she wanted to.)

Terminator, as a series, mucks about with ideas of fate a whole bunch. That Judgment Day and the war between humans and machines is an inevitability. That no matter what happens, no matter how many cyborg Austrians Skynet sends back, or how many computer labs Sarah and John blow up, things will still shake out in a similar way. Machines will gain sentience and turn against their organic masters, and humanity in turn will not go gently into the night.

Spoilers: This also turned out to be the entire plot of Mass Effect. After three games of mystery and build up, the modus operandi of the galaxy threatening Reapers turns out to be based on the same idea. That once galactic civilization reaches a certain point of advancement, a calamitous war between synthetics and the organic creatures that built them is inevitable. So the Reapers take it upon themselves to swoop in juuuust before that happens, mop the floor with everyone, and reset things back to the stone-age for a few millennia before coming back to do it again… For reasons? Look, BioWare had to close that diamond out somehow, and I’m not here to reopen old wounds. The internet has heard enough about the ending of ME3.

However, there is a more interesting story tucked inside all that nonsense. The Quarians and the Geth are used as a micro-reflection of the overall problem. The Geth are a (more-or-less) sentient race of robots who after a horrible war have driven the Quarian people off of their home planet, banishing them to a dangerous nomadic lifestyle among the stars. Seems like typical evil robot behavior.

The twist is, it was the Quarians who fired the first shot. They weren’t taken unawares by some evil super computer; none of the laws of robotics were violated. The first time a Geth showed a glimmer of freewill, the Quarians freaked and tried to wipe out the entire species. The Geth only fought back to defend themselves. Of course, it turns out that a race of walking weapon platforms make better soldiers than a race of hypochondriacs who get sick faster than a middle-schooler on report card day. No fate but what we make indeed.

Also, Legion is a badass and I always made room on my squad for him. You should too. 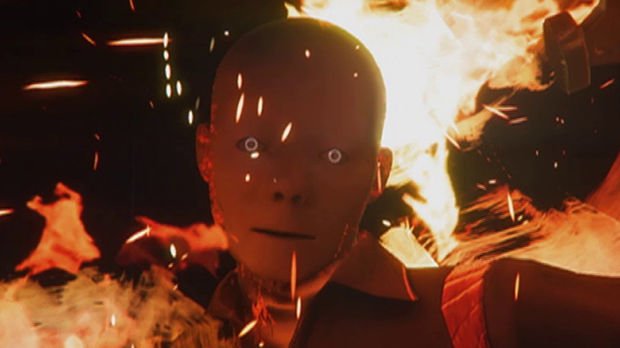 Cost – $49.99 on Steam, cheaper on console (Dinner after the show so you can sit around and talk about how bad the film was and apologize for dragging your significant other to it.)

Ok, so we all know that the Alien is the star of Isolation, fine. But let me tell you a story about the Working Joes, the ever so helpful automatons that wander the rapidly deteriorating halls of the Sevastopol station.

I’ve been playing Isolation for the last couple of weeks and it’s been great, but slow. I’m trying to do it properly, so I started the game on hard and I’ve been taking pains to explore every area, picking up every piece of scrap, every bullet, while never actually using any. I never get spotted, never fight anything or anyone, I just try and make my way through the station with as little static as possible like a person in that situation would try and do.

Then it happened. I messed up. A Working Joe spotted me in a restricted area. His eyes glowed red like two angry stars, and he started stalking towards me with purposeful, murderous intent.

“Finally,” I thought. “I was worried I’d have to carry these bullets forever.”

Because as much as I’d been playing the game like a good little survivor, a part of me really wanted to fire the fucking huge revolver I got near the beginning of the game. Now I had an excuse. I pulled it out — mint-condition, heavy with potential. Calmly, carefully, I aimed down the barrel, and sent a piece of screaming hot lead directly into the Crash-Test-Dummy-like forehead of my target.

Another headshot. Another. He didn’t even slow down. Then he was close, right on top of me, and I panic fired into his chest without aiming until the gun clicked dry. With seemingly no effort, he hauled me up one-handed and choked the ever living shit out of me until I struggled free, staggering away like a wounded animal directly into a dead end. I fumbled around, trying to reload the revolver but I’d never done it before and somehow I only managed to jam a single bullet into the chamber before he caught up with me. It doesn’t do me any good — this time he just beats me until everything turns black. 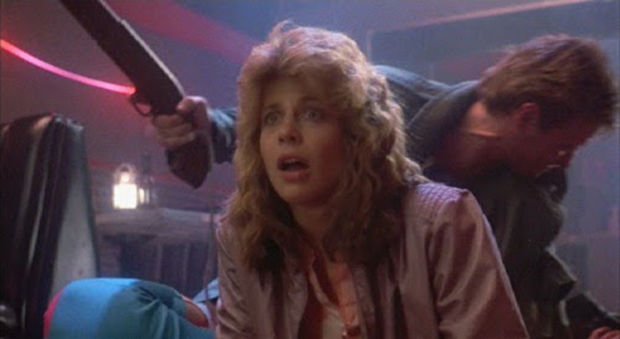 I’ve played a lot of games with big, scary, implacable killer robots in them. But, I’ve never felt closer to Sarah Conner then in that moment. Completely helpless, just as outmatched by a stupid Working Joe as she was by the T-800. Absolutely terrifying. It was an emotional response that no gaudy new Terminator film could possibly deliver and a great argument for spending more time in my living room getting caught up with some of the killer robots already in my life, and less time tripping over people looking for a seat in the movie theater.