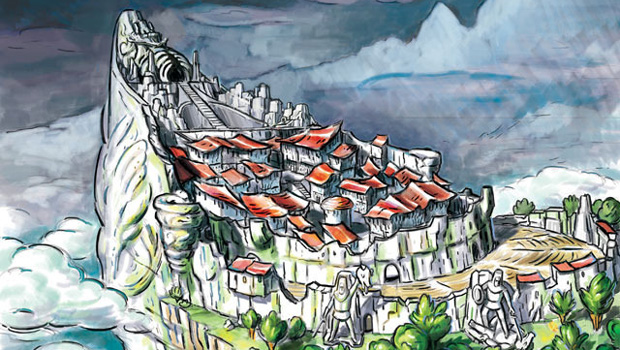 For some folks, Skyward Sword was the pinnacle of the Zelda franchise, while for others, it was the culmination of everything wrong with the series’ direction over the past decade and a half. Even though I personally enjoyed the game, I too felt like I was being guided through a carefully curated gallery of set pieces rather than being allowed to explore the world on my own terms.

Writer Tevis Thompson felt so strongly about Zelda‘s missteps that he wrote a very in-depth essay, “Saving Zelda,” earlier this year. The essay struck a chord with artist David Hellman, best known for his work on Braid, and the two began discussing a project that could both tell the kind of open-ended tale that they crave and serve as subtle criticism of modern videogame narrative structure. That project is Second Quest.

Second Quest is a 50-page color comic that draws heavy inspiration from Skyward Sword and the rest of the Zelda mythos yet presents an original world with original characters. It’s about a curious girl living on a peaceful floating island who discovers that the legends she’s heard may not be true. While the art is vibrant, the aim of the book is not to deliver all the answers, only possibilities up to your own interpretation.

Tevis and David are holding a Kickstarter that will end on November 16, but already they are less than $9000 away from their $50K goal. For your donations, you can receive a digital copy of the finished work, a hard copy courtesy of Fangamer, or original art pieces. Whether or not you agree with their Zelda criticisms or with their ability to tell a “game” story in a completely different medium, you ought to admit that the project shows incredible promise.