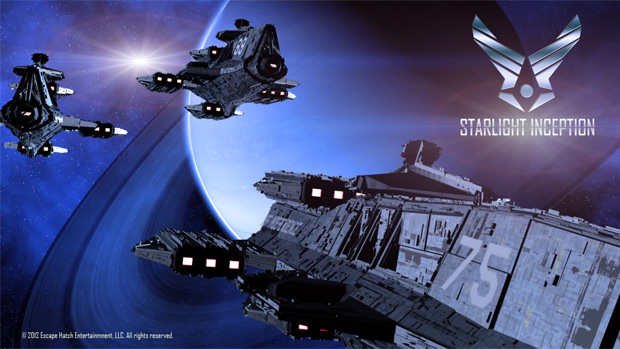 Yep, another Kickstarter. I know, we also got tired of them and that was well before Double Fine Adventure changed the game. As a result, I completely glossed over a few press releases for Starlight Inception, which may have been a mistake. (Hot tip: make your subject line “SPACE COMBAT GAME AWW YEAAH” in the future!)

In a nutshell, it’s a space combat game for PC and PlayStation Vita with first-person and third-person views (!), support for a full range of sticks and other control types (!!), power management (!!!), and created by a former LucasArts employee, Garry Gaber, who appears to love the genre as much as you and me.

At the time of writing, the project is at $63,885 out of a required $150,000 with only six days to go, so if you want to make this happen, you may want to jump on board right now. A $15 pledge nets you the game on either PC or PS Vita when it’s done, as well as access to the private forums.

There are a number of reasons why this project instills a lot more confidence than most Kickstarters I’ve come across in the past months.

For starters, while many developers who pitch Kickstarter projects can sound passionate enough to elicit an emotion similar to when you see a baby animal do something cute, there’s something genuine about Gaber’s pitch. Maybe it’s because many of us who just love the genre, and who still have the keyboard layout of X-Wing, TIE Fighter, or even I-War hardwired in our brains, can relate to his pitched passion for these games. If we had ended up working at LucasArts during the glory years, perhaps we too would have left that company and started for ourselves after the space combat genre all but died out. But even then, we’d probably still want to make a proper space combat game despite nobody wanting to invest in it. And perhaps we’re a bit lazy, so we’d be perfectly happy if someone else would just do this for us, just so we can play it one day.

Second, many Kickstarter projects are not necessarily from unknowns (sometimes big names are attached in various ways) but they often don’t convey a sense that these people know how to run a structured project on a budget. Sometimes you just want to play the game that is being pitched, or you want to support a small indie team with a cool idea, and these aspects can overrule the perception that whoever you are backing may lack actual experience when you only have to donate a few bucks. When backing something like Double Fine Adventure, Wasteland 2, or Leisure Suit Larry, you tend to have faith that the people working on it actually know what they are doing, and have the experience to make it work.

Although working at LucasArts on a lot of games that involve space ships sure helps, Gaber’s listed credits of writing and directing Star Wars: Force Commander and Galactic Battlegrounds are perhaps not very likely to win over any die-hard TIE Fighter fan. Then again, I can’t imagine it was very easy at the time to just take over a lead role from Lawrence Holland when it came to LucasArts’ space combat titles, unless you planned to murder him. Anyone who decides to move from designing 3D space ships to leading a production that doesn’t have that many space ships at all, also shows that they are capable of more than just blindly pursuing their passion with no regard for planning or cost-efficiency.

Who am I kidding, though? They had me at power management between weapons and shields, mission designs that sounds like the kind seen in the TIE Fighter/Freespace 2 era (and more recently in SOL: Exodus), and being humble about the funds they require to make it happen.

There’s a Reddit AMA if you want to know more.