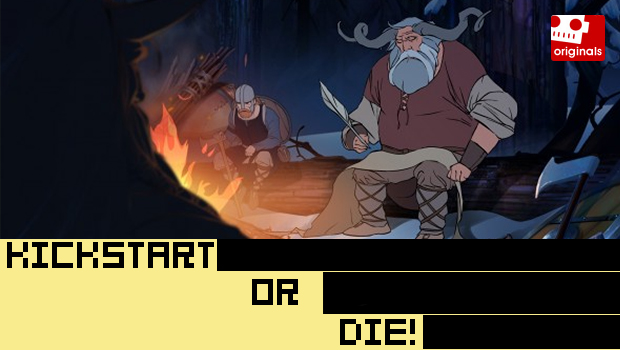 With an SEO-friendly name change and a new selection of projects, I return with a new entry in my Kickstarter-focused series. I’ll be nice this time. No, really!

I have a more optimistic outlook on this week’s contenders; partly in response to complaints last week, but mainly due to the current selection of strong projects. It’s easy to be cynical about Kickstarter when so many misuse it, in effect tarnishing its legitimacy as a means of funding and turning away its surrounding community. Not surprisingly, the two maligned entries last week have barely made a dime in the interim.

When used properly, Kickstarter can be a resource unlike anything else. It gives players the ability to support the games they’d like to get made, while also giving developers freedom to make their passion project without publisher interference. Kickstarter’s ability to unite artist and audience at such an early stage in production is as valuable, if not more, than the money itself. And, in the very least, we can still laugh in unison at the bad Kickstarters.

Three ex-Bioware Austin employees with impressive portfolios, a novel premise, and some enticing game footage: This is an exemplary Kickstarter. Between its unique art style and Viking setting, I look at this game and think, “Yes, I would like that!”

The Banner Saga is a strategy-RPG focused around a wandering Viking clan. Outside of grid-based, tactical battles, you’ll recruit members, make choices that alter the plot, and manage your resources. There will also be multiplayer. According to the Kickstarter video, we can expect some hands-on time with the online component this summer.

Why did it succeed? If you have mutton chops and a fro, I am more likely to buy into your Kickstarter. It also helps that Banner Saga has what is not only an eye-catching visual style but a very unique one, inspired by old Disney films (and I imagine Don Bluth.) Seeing those type of visuals in an SRPG — a genre mostly limited to portables with weak sprite-based visuals these days — is an exciting proposition.

Unlike Shadowrun Returns and Wasteland 2, these guys don’t have an illustrious career or crowd of fans to support them. Seeing so many willing to give to their project is a turning point for Kickstarter. It shows that having a good idea and demo is enough. No established intellectual property necessary.

The Verdict: I have a good feeling about this one. Not only is this a talented group, they are also putting their work in front of their portfolios — and their portfolios aren’t anything to sneeze at. However, I would have liked to hear more, or anything, about the game’s combat. The promo video says some pretty bold things about the originality of the project, but I don’t get the sense that anything all that new is going on within the game’s mechanics. Another concern is that these guys may have underestimated the time it takes to properly balance a game of this nature. Here’s hoping they take their time and make a game that not only looks great but plays great as well. Hurrah for hand-drawn animation!

OMFG, guys, Nintendo is making a new Mother/Earthbound! Wait, that’s not Earthbound? Well, whatever, because it looks close enough.

Boot Hill Heroes looks like Mother 3 and Ganpuru had a baby and then stripped it of all its alien genes. BHH is designed and programmed by two amateurs with a passion for a good Japanese-style 16-bit RPG. Though the look of the game borders on plagiarism, they are at least going for something unique in setting. Even if it is a shameless tribute to Earthbound … what’s so bad about that?

The Verdict: The backgrounds and buildings of the game look nice, but that’s because they look directly lifted from Earthbound. The models, especially in battle, look far, far worse. I don’t have a lot of faith in these guys making a polished game, but I think they may be able to pull off a very charming one with a unique setting.

My main gripe with this Kickstarter is that they are asking for $5,000 for audio. This is a 16-bit indie game. Does it really need such a large budget for that sort of thing? As amateurs, do they have any idea what they want and what it would cost? It seems like a dishonest way of just asking for money to pay their bills. After all, there are tons of chiptune artists willing to work for free and simple sound programs to meet their goal. For that alone, I’m not a fan of this Kickstarter. Maybe I’ll change my mind when I hear an epic Morricone-esque soundtrack in-game, but it sounds like an unnecessarily lavish feature for an amateur project of this size.

Here’s a game with a unique premise, awesome trailer, and yet it is lagging far behind its Kickstarter goal at the time of posting this article. What’s to blame? Bad taste? Touch controls? Is $500,000 too much to ask for a game this niche?

Whatever the case is, Republique is an intriguing game that doesn’t have a direct influence. Republique is a stealth game in a horror-themed 1984-inspired dystopia. Instead of controlling the person surviving this nightmare world, you direct them from your phone. You help her survive by directing her and controlling the electronic devices contained within the rooms she occupies,

Why is it failing? Republique is an ambitious game delivered in a grand, cinematic way seldom seen in original iPhone games. I trust that these guys know what they’re doing, but I think they failed at conveying how this game will play in practice. They try to sell their ambition, but people want to know that this game will be fun to play first. From a distance, it’s easy to imagine it could play like a dull tap-fest.

The Verdict: I really like the mood and ideas Republique embodies, but until I see more of how it will play I’m skeptical. Maybe the game will play like Ghost Trick and be amazing! But, maybe not. If the developer only showed us or told us a bit more, I’d feel much better about backing this game. Too many Kickstarter developers talk too much about their ambitions and art style, when they should give equal attention to mechanics and design.

Is this the first fake Kickstarter for a game or just the first to get caught? I don’t know, but one thing is for sure: You certainly won’t be hearing about this game again.

While the Reddit community proved this project to be a fake — office photos taken from other websites and concept art stolen from DeviantART — I’m almost convinced this is a parody of Kickstarter projects in general. In the promo Kickstarter video, this guy practically rattles off a list of Kickstarter cliches. Left studio to make game? Check. It’s a game about the player’s choice? Check. It’s an old-school RPG? Check. Publishers would never want to put out a  “triple-A” fantasy RPG? … yeah.

This guy is a complete tool but I’m impressed he had the balls to put his face on this project.

Why did it fail? Well, it was cancelled after all. This guy was a fraud and an airhead for putting his face on the video. It makes me happy to see the community see through his bullshit. Perhaps Kickstarter investors are a bit more cautious and savvy than I give them credit for. However, this reflects very poorly on Kickstarter who hosted this project without detecting it as a fraud. If Kickstarter is going to be hosting projects asking for millions, they need to start conducting a more thorough screening process. It didn’t take more than a quick Google search to prove this guy was a fraud.

The Verdict: You mean I won’t be getting my MYTHIC God Swords after all? :sniffz:

Did you guys back any of these projects?

Do you ever research a Kickstarter project’s legitimacy before investing?