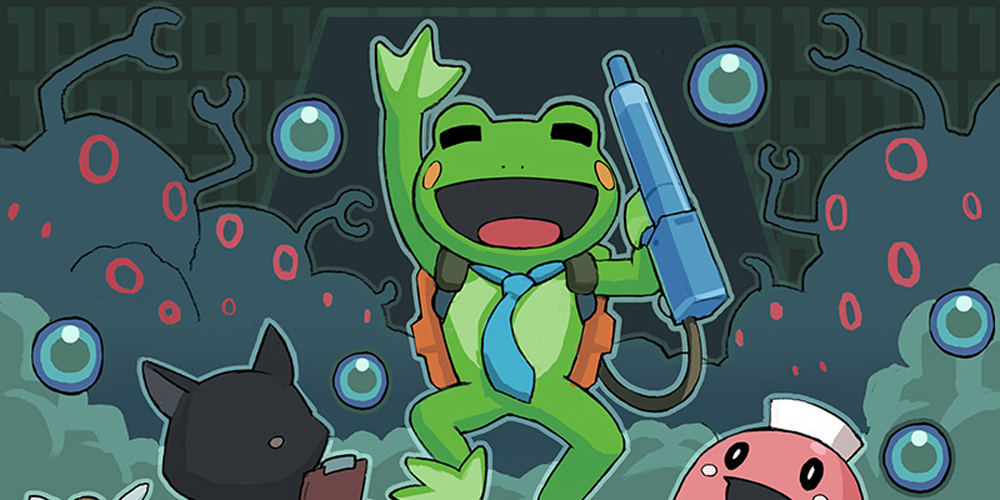 Get ready to croak… again

Kero Blaster is one of those games where the second I published its review on Destructoid, people started questioning the score that I gave it. “How can a three-hour 2D run and gun platformer with two-frame run animations be a 9/10?” they asked. “Looks like something I’ll wait to get on sale…” they said. I understand these kinds of fixed standards for what makes a game worth buying, but the fact of the matter is, some games defy those standards. They’re able to do more with less, and end up being experiences you bring with you long after you’re done with them. For me, Kero Blaster ended up being one of those games.

I know I’m not alone on that. Game developers in particular seemed to love Kero Blaster, especially after it was updated with a whole new ‘Zangyou’ campaign mode. One developer was so inspired by it that they made their own game, a cute little platformer called Crowtel, that in time, ended up getting its own bonus campaign as well.

So what is it that makes Kero Blaster so special? I touched on some of that in the review, but I’ll make a few more point about it now, as the game just recently launched on the PS4.

Playing Kero Blaster again, I realized that it might have better difficulty scaling than any game in the genre I’ve ever played. It starts you with almost no health and a weak, short-range gun that would be pure frustration elsewhere (I’m looking at you, Metroid 1), but here it’s perfect, as you’re set against just the right set of problems for the tools at hand.

Many of us who’ve been playing games for a while take our ability to play 2D action platformers for granted, but the fact is, it’s an acquired skill, almost as complicated as learning to walk. Making that process fun is one of the best things a game can do. Kero Blaster knows this, and as such, it teaches the player to crawl, walk, run, and eventually, even fly, in rewarding ways throughout.

The breadth of challenges here, and the ease with which the game eases you into keeping pace with them, is especially impressive given that Kero Blaster was originally released on PC and on mobile at the same time. Making a 2D platformer that works nearly as well with virtual buttons as it does with a control pad is quite a feat. That said, I can’t imagine playing the game’s Zangyou mode on a smartphone. It’s much harder than the original game, but it’s all totally worth it.

The new level designs, enemies, and bosses are a great addition, but more importantly, the all-new storyline is one of my all-time favorites. Without spoilers, I’ll tell you that the plot revolves around a work-generating machine, and how it creates an event that feels like the apocalypse for salarymen and women around the world. Anyone who has suffered a job that feels like a never-ending stream of passionless, bland tasks is sure to relate.

As much as I love that story, I didn’t see it to completion until this week. That’s because the PS4 is the only place I’ve actually been able to beat Zangyou mode. Mobile was just too much of a struggle, and PC gaming in general is too cramped for me to commit to for hours at a time. On PS4, I could sit back on my couch, use the responsive DualShock 4 controls to my advantage, and tolerate dying over and over again on my path to perfect overtime.

The port does suffer from some screen tearing though, which caused me to lose my footing mid-jump more than a few times. It’s also a shame that the Pink Hour and Pink Heaven bonus games from the PC release didn’t make it to consoles, as they are pretty great in their own right. They’re both for free on PC though, which lessens the blow.

If you’ve already played Kero Blaster on PC, this PS4 port won’t offer many surprises. As for the rest of you, I really hope you give the game a chance. You just may fall for this hardworking janitorial amphibian and his cast of Studio Ghibli-inspired costars.