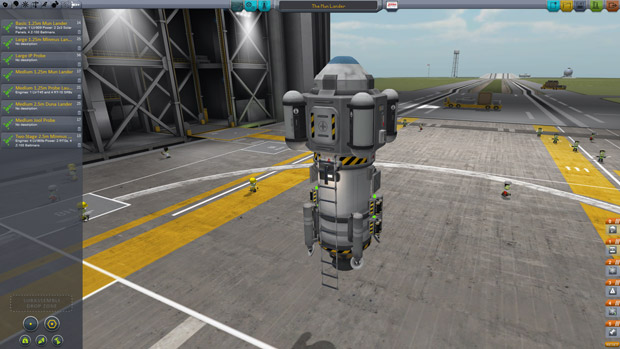 One of the game’s biggest updates

A substantial update has come out for Kerbal Space Program this week, adding Career Mode for those of us wanting more structure to go with the existing sandbox option. Too much freedom can be overwhelming, especially in a game about launching spacecraft.

As ever, this is a work-in-progress, but the end goal is to have players: “Hiring their own astronauts, doing Research and Development, building ships under a budget and taking on contracts to earn money and build their agency’s reputation.”

Update 0.22 focuses on the R&D aspect. Find the full patch notes below.

* Career Mode:
– Career Mode is now open! Although still very much under development, you can now start new Career saves.
– Sandbox mode, of course, is also available from the start.

* Research and Development:
– Added the Research & Development Facility to the Space Center.
– R&D allows players to unlock parts (and later other stuff) by researching nodes on the Tech Tree (In Career Mode).

* Science:
– Researching requires Science, which must be earned by performing experiments during your missions.
– You can now collect surface samples while on EVA, and process them to do Science.
– Science experiments return results, which are different for each situation in which the experiment is performed.
– Experiments can (as all proper experiments must) be repeated over many different situations across the whole Solar System.
– Added a new dialog to show the results of experiments when reviewing the collected data.
– Added a new dialog to show a breakdown of all scientific progress made after recovering a mission.

* Parts:
– Added new scientific parts, like the Materials Bay and the Mystery Goo™ Canister. Also added experiments to many existing parts.
– The old science sensors now have a purpose. They all have their own experiments which enable them to log scientific data.
– The antennas are now functional, and can be used to transmit science data back to Kerbin, if recovering the physical experiments is not an option.
– Antennas consume massive amounts of power when transmitting. Make sure you have fresh batteries in.
– Added a new deployable antenna, which is an intermediate model compared to the two original ones.
– Completely remodelled the Communotron 88-88 Comms Dish. The new mesh uses the same placement rules so it won’t break ships that have it.
– Nose Cones now actually help with improving stability during atmospheric flight.
– Revised a lot of part values and descriptions, in preparation for them actually meaning something in the near future.
– Overhauled the landing legs and gears, they now have proper shock-absorbing suspensions.

* Editor:
– Added a system to allow saving and loading of Sub-Assemblies.
– Subassemblies are subsets of spacecraft, which can later be attached to other designs and re-used.

* Space Center:
– The KSC Facilities have all been revised, and feature new ground meshes and many other graphical improvements.
– Greatly improved the Island Airfield.
– Added lighting FX to several facilities. The Runway (among many other things) is now properly lit at night.
– Added a new backdrop and soundtrack for the Astronaut Complex Facility.
– Added a new music track for the R&D Facility.

* Flight:
– It is now possible to recover a flight after landing/splashdown on Kerbin without going through the Tracking Station. Look above the Altimeter.
– The SAS system was again largely overhauled, based on all the feedback we’ve gotten from everyone. It’s now stabler than ever.

* Solar System:
– Celestial Bodies now support Biome Maps, which are used to create different conditions for experiments.
– Biomes are currently implemented on Kerbin and on the Mun, more will be added on later updates.

* Launcher:
– We’ve got a new launcher application for KSP, featuring a news bulletin, patcher management, and also allows you to tweak settings from outside the game.