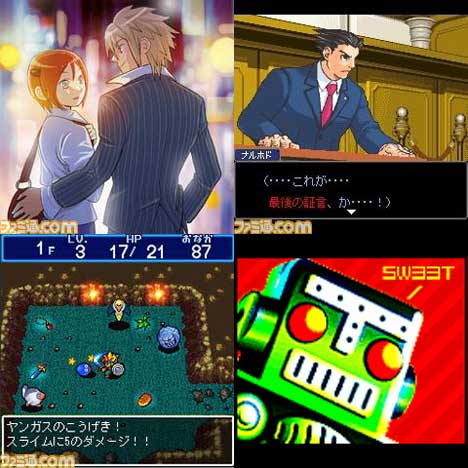 Why am I bothering to post this? Well, from what I’ve experienced, the American cell phone game market doesn’t have any worthwhile games that you can’t regularly play on the Internet (Tetris and Pacman, for example). With these sort of games out in Japan, I can’t help but be envious of our friends on the other side of the Pacific.

So, if you have any interest in Days of Memories, Phoenix Wright, or Dragon Quest Mobile, then cross beyond the jump to check out a bit of information about all these games.

This game is essentially a dating game for your cell phone — a popular one at that too; this is the 5th game in the series. The storyline is a typical dating sim: your characters gets to meet a bunch of girls (I believe you’re a cameraman), and then you get to manage your relationship with all of them. Depending on the game, some will take their clothes off for you, while others will just promise you eternal love.

What I find interesting is that dating sims with this swimsuit imagery (shown above) is actually making it to the cell phone. Yeah, sure, there are some risque games coming out for the handhelds, but cell phones seem like a whole different world. Dating sims don’t have much of a market here in the U.S., but would any of you buy this if it came out here?

For our intrepid lawyer, the Japanese can download three scenarios for a case. From what I understand, the first release is the detective work, collecting all the evidence from the crime scene. Then, in the second game, you interrogate the witnesses and defend your client. The third game is the climax of everything.

Episodic content in this case seems really interesting — it’s certainly a good way to bring seomthing like Phoenix Wright to cell phones. The only cost that they list is a 315 yen for a monthly “information charge.” I don’t know much about how buying stuff on Japanese cell phones work, so I’ll defer to someone else on that issue. Is episodic content on cell phones worthwhile, do you think? Would you be willing to buy games in bite-sized bits so that you’re not playing an incredibly long game on your phone?

Playing these old RPGs on the cell phone is nice, but I doubt I’d ever go through with it. I can’t give a particular reason, it’s just that it doesn’t feel right to me. What do you guys think about playing a full-length RPG on a cell phone?