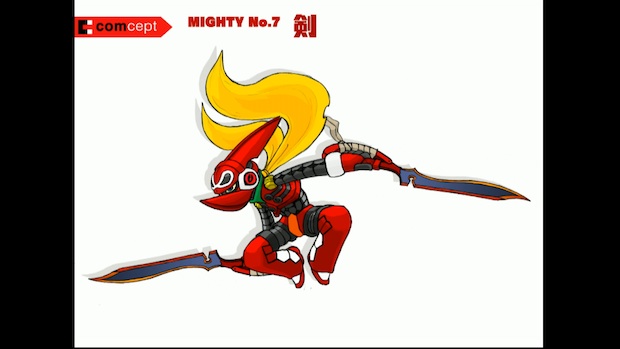 Comcept’s Keiji Inafune came to D.I.C.E. Summit 2014 today to talk about the potential of crowdfunding and how the games industry might change for the better through the freedom they provide. But he also took the opportunity to show off robot Mighty No. 7 for the first time, from his upcoming game Mighty No. 9.

From his mobile game The Island of Dr. Momo, Inafune took the main character’s scissors head attachment and used the idea for Mighty No. 7. But that didn’t work out how he would have liked, so he tried cutting blades instead of scissors later. A few more tries gets us to what you see above, the final design for Mighty No. 7.

7 is a stealthy, fast-moving ninja type character, Inafune says. You can see the earlier designs in our gallery below.

With this, all nine robots have been revealed.

Inafune says that so far things are going well for Mighty No. 9. Specifically, he said that player movement is right about where he wants it. A short video showing a play test had him smiling, pleased with the results.