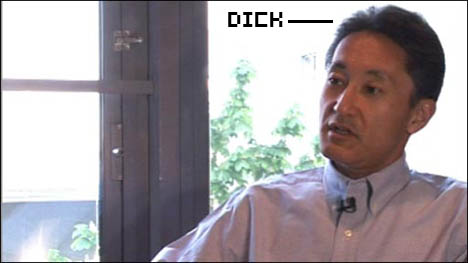 Oh, Kaz. You say really silly things, and we love you for it.

His load of crap from this month relates to Xbox 360 exclusive titles. According to a recent interview, Kaz says that he would rather take a bullet to the head than pick up any of the the 360 exclusives.

After two unsuccessful attempts to fend off the question, the Sony Computer Entertainment boss chooses death:

Aftonbladet: But if someone is holding a gun to your head and you have to choose one. Which game would it be?

Hirai: Okay.. then they have to shoot me, because I really don’t think we need any.

Come on, Kaz. Don’t be a dick. I like the PS3, and I’m really pleased to see some of the upcoming exclusives for your flagship system. But you’re flat out lying to say that you don’t want a piece of the Halo or Gears of War pie. They’re good games that would make you more money. It’s understandable that you would want to avoid giving the competitor’s franchises any credit, but don’t be a dick about it!