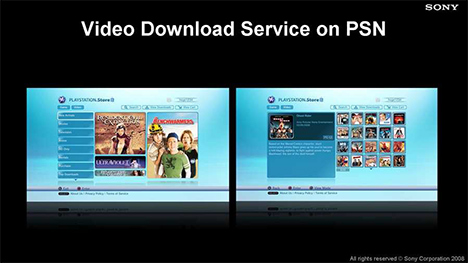 I’ve always wondered why Sony — with its massive media holdings in the film and music industries (i.e., Sony Pictures Entertainment and Sony BMG) — hasn’t yet brought that content to the PlayStation Network. After all, Microsoft has a wide variety of downloadable media available on Xbox Live Marketplace, and such a service on the PSN would almost certainly be a cash cow for Sony.

Well, I will have to wonder no longer — at least on the movie side. Yahoo! News reports that Kaz Hirai, President and Group CEO of Sony Computer Entertainment, announced in Tokyo early this morning that a “movie download service” will be making its way to the PlayStation 3 this summer. That release window applies to America; Sony will offer the service in Japan and Europe at later dates. I wonder if we’ll see some more details at E3…

Above is an image of how the download service could look on the PlayStation Store; the screenshot was found by CVG in a PDF file on the Sony Global corporate website (a larger version is available in the gallery below). The service looks like it will be seamlessly integrated into the current interface, perhaps with a new tab or page. Offered on the page are Sony Pictures Studios films like Men In Black, Superbad, the Spider-Man trilogy, and Donnie Brasco.

Yet again, I have to bring up Jim’s old editorial on what he called the “Xbox Exodus.” Xbox Live has been hugely successful, in no small part due to the popular content available for purchase on its Marketplace. If Sony can deliver comparable content (of course, pricing and the availability of high-definition video are key), it would surely draw more users in. We’re waiting with our wallets open, Sony — bring the goods, and we’ll bring the profits.