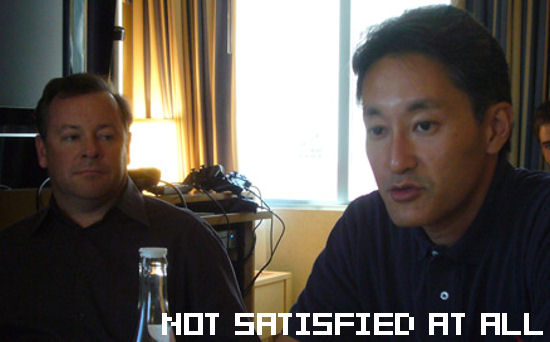 Kaz Hirai, the Tekken character-resembling PlayStation boss, isn’t satisfied. It’s not because nobody else is as impressed as he is with Ridge Racer, it’s because he himself isn’t impressed with one of the PS3’s biggest future hopes, Home.

The displeased Sony Computer Entertainment head confessed that he wasn’t happy with the in-beta version of Home and is doubtless aiming for significant improvements to what he declares a big project for his company. This came out as he spoke of the feature’s Spring 2008 delay:

“We believe the delay would have a positive effect. I personally am not satisfied with the current version of Home. This is a very big project for the PS3 and we want to make sure that we deliver to our hearts content. We hope everyone will look forward to its spring release next year.”

Are the PS3 fans in the gamer community actually looking forward to Home at all? I think it’s an interesting project, but I wonder how many people among Sony’s main demographic will care enough to consider it a huge selling point. What do you think, noble readers? Will all the effort Sony’s putting into Home pay dividends or not?

[With thanks to John McGovern, Easybake Oven]