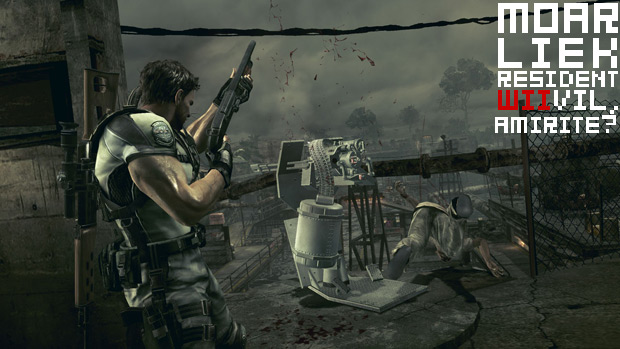 Poor, poor Wii-owning Resident Evil fans. All you guys want (I think) is a properly numbered RE title on your little miraclebox, and Capcom keeps throwing you downgraded, light-gun scraps. Personally, I really like light-gun games, but I can see how that might eventually get a little old. Ironically, it was during a media preview for Resident Evil: Darkside Chronicles (an on-rails light-gun game that covers the events of RE 2 and Code Veronica) that Wii owners got a sliver of hope for Resident Evil 5 Wii.

This isn’t the first time rumors have popped up concering RE 5 on the Wii, even though producer Jan Takeuchi has gone on record saying that it would be “difficult to make.”

At the event, British gaming magazine gamesTM asked Darkside Chronicles producer Masachika Kawata whether or not Resident Evil 5 would ever come to the Wii. He seems to disagree with Takeuchi about the difficulty,replying:

“Hypothetically speaking, the Resident Evil 4 engine would work perfectly for replicating the gameplay but we would never be able to recreate the graphical quality. A gun shooting game like Darkside Chronicles makes much more sense for Wii so, in short, Resident Evil 5 Wii Edition isn’t likely to happen.”

“Having said that, Cavia has surprised us with the quality of graphics in Darkside Chronicles, so it may actually be possible after all.”

Cavia (Bullet Witch, Nier) is currently collaborating with Capcom on Darkside Chronicles, apparently handling the graphics. While Kawata is right — Darkside Chronicles certainly looks very nice on the Wii — I don’t even see why it’s an issue. If Resident Evil 5‘s gameplay can be replicated perfectly with the Resident Evil 4 engine, there’s no reason not to port the game, even if it takes a hit in graphical quality. Since the Wii Edition of RE4 was the best selling version of the title, I’d bet my grandmother’s glass eyes that Capcom would make a profit.

The lovable Jonathan Holmes certainly thinks that RE 5 could succeed on the Wii; do you?