We live in trying times in virtually every respect, and now we find ourselves ass-deep in one of the fiercest political quagmires the country has ever seen. Edging closer and closer to election year, our bipartisan political system presents us with a number of would-be candidates, prepped and ready for their shot at the big chair, and every one of them scares the crap out of me in one way or another.

America needs a new brand of leadership, one not offered by any of the hopefuls currently on our plate. We need a candidate that can pull a ladder from nowhere and climb anywhere he needs to go. Perhaps most of all, we need someone who can belch forth a volley of fire at a moment’s notice. 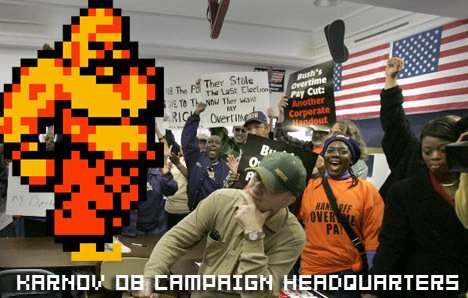 Karnov is a new candidate for a new generation; he is a candidate that believes in the power and potential of the individual. Karnov believes in a free market alongside a strong sense of social justice, and a world where jump boots and K icons are scattered freely amongst the populace. Karnov supports the State of Israel so long as they discontinue their military’s use of Wizards, Three-Headed Dragons and Wingéd Daemons — entities that Karnov has been firmly against since his early political career. Karnov is a devout fire-breather and believes in a reunification of fire-breathing organizations and government. Karnov is pro-manboobs.

The elderly have a friend in Karnov. Where other candidates seem resolute in disallowing the elderly and infirm the freedom to travel where and when they want, Karnov supports a comprehensive Magic Ladder distribution plan, in which every Medicare-eligible adult will receive free Magic Ladder coverage. These ladders will allow the elderly access to the immediate ascent that wealthier Americans enjoy at no out-of-pocket expense and without raising taxes.

“Without raising taxes?!”, you cry. “Impossible!” You might be right, but consider our candidate: Karnov, an ex-strongman from the circus, built an amazing fortune fighting for treasure against djinns and skeleton warriors — a fortune he now wishes to share with the American public. Karnov’s endless wealth will be used to finance the aformentioned Magic Ladder benefits package as well as fire-breathing schools around the country. What other candidate can offer America such a refreshing change?

Did I mention that Karnov supports manboobs? 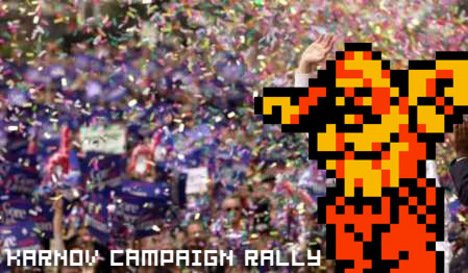 You might be asking yourself, “Hey, Karnov’s Russian-born! How can he be elected President if he wasn’t born in this country?” While this is a patriotic question indeed, it rests upon the presumption that the Constitution should not be questioned; Karnov, however, disagrees. What good is a Constitution that causes so much dischord in this great nation of ours? With your support, Karnov can blow a mighty wave of hellfire at our most sacred living document and singe away its unnecessary or otherwise redundant content and leave behind only what matters. Take that, Founding Fathers — Karnov has cleaned up your mess!

Because he believes in the American spirit of travel, Karnov seeks to install saunas in all Department of Transportation-maintained rest stops along America’s highways. And worry not about the safety and security of our borders, John P. Motorist: Karnov will bring the war on terror to the front doors of evildoers around the world and, given enough red orbs, can fire up to three fireballs at once. That’s defense we can trust. Karnov offers national security we can count on.

Karnov knows how important nutrition is for our nation’s youth. That’s why Karnov seeks to expand the breakfast and lunch programs at public schools throughout the nation with what he refers to as the “Eat Like Hearty Bear” meal plan — a meal consisting of stroganoff, boiled potatoes, and vodka. For those children who have a less than able constitution, strawberry- or citrus-flavored vodka can be substituted. Federal funding will be available for these meal plans with the exception of the vodka, which Karnov himself will sweat into bottles and distribute directly to school districts.

Let us greet the new century not with a handshake, but a hearty head-butt — let us elect Karnov as our president in 2008.