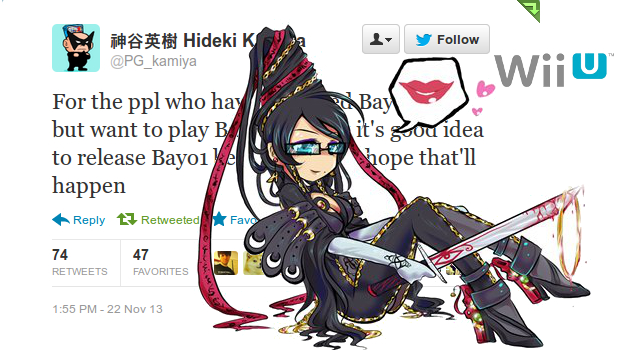 Nintendo’s announcement of Bayonetta 2 as a 2nd party Wii U exclusive was a big deal last year. Some fans immediately exploded with rage, demanding that the game also be brought to the PS3 instead. Now it seems those roles have reversed, although in a much more pleasant way. . Fans of the original game, (including it’s director Hideki Kamiya), are asking for Bayonetta’s first adventure to head over to the Wii U.

Kamiya, famous for his twitter acumen, recently let his followers know that if Nintendo decided to give them the green light, Platinum could port Bayonetta to the Wii U before Bayonetta 2 is released next year. He went on to say “For people who haven’t played Bayo1 yet but want to play Bayo2, I think it’s a good idea to release Bayo1 before Bayo2. I hope that’ll happen”. That was enough for some ambitious dreamers over at NeoGaf to start “Operation Dead Angels” — a group dedicated to making enough noise for Nintendo to bring Bayonetta to the Wii U, complete with list of applicable twitter accounts and Miiverse posts to apply to the cause.

Nintendo and Xseed never opened up about exactly how much Operation Rainfall influenced their decisions to localize Xenoblade, The Last Story, and Pandora’s Tower, but seeing as all three games eventually made it to the US, we can guess that it didn’t hurt. It would be interesting to see if a big fan campaign for Bayonetta on Wii U would carry any weight. Xbox 360-to-Wii U ports are reportedly fairly inexpensive to put out, and hile Bayonetta sold well enough on the PS3/360, it’s fair to guess that there are plenty of Wii U owners that would be willing to pick the game up. Throw in some bonus features and a budget price and you have a release that’s sure to bring in Bayonetta fans new and old. Make Captain Falcon playable, complete with Bayonetta-style sexy animations and half-nakedness and I’d be happy to double dip.