At PAX? Go find this game

Even before I played it, Just Shapes & Beats had my heart racing. The four-man group ahead of me in line was just moments away from surviving the final level. Everyone was dead, save for one yellow triangle that dashed frantically around a screen packed full of attacking pink hazards.

I think I actually cheered when the last man standing dodged his way through the obstacles to the finish line. I was on an adrenaline high from just watching strangers play; I don’t know how my heart didn’t give out when I actually got my turn. This is easily the most rewardingly stressful game I’ve ever played.

Just Shapes & Beats is a magical hybrid between a bullet hell shoot-’em-up and rhythm game. Rather than fight enemy ships, players take control of a colorful shape whose only means of survival is a quick dodge that shoots them forward a short ways and grants temporary invincibility. The goal is to dodge around and through the pink shapes that float, dart, and spin across the screen to the beat of music in the background. It’s a really simple concept, but one that is masterfully executed. Things go from zero to chaotic in an instant but somehow never in a way that feels overwhelming. 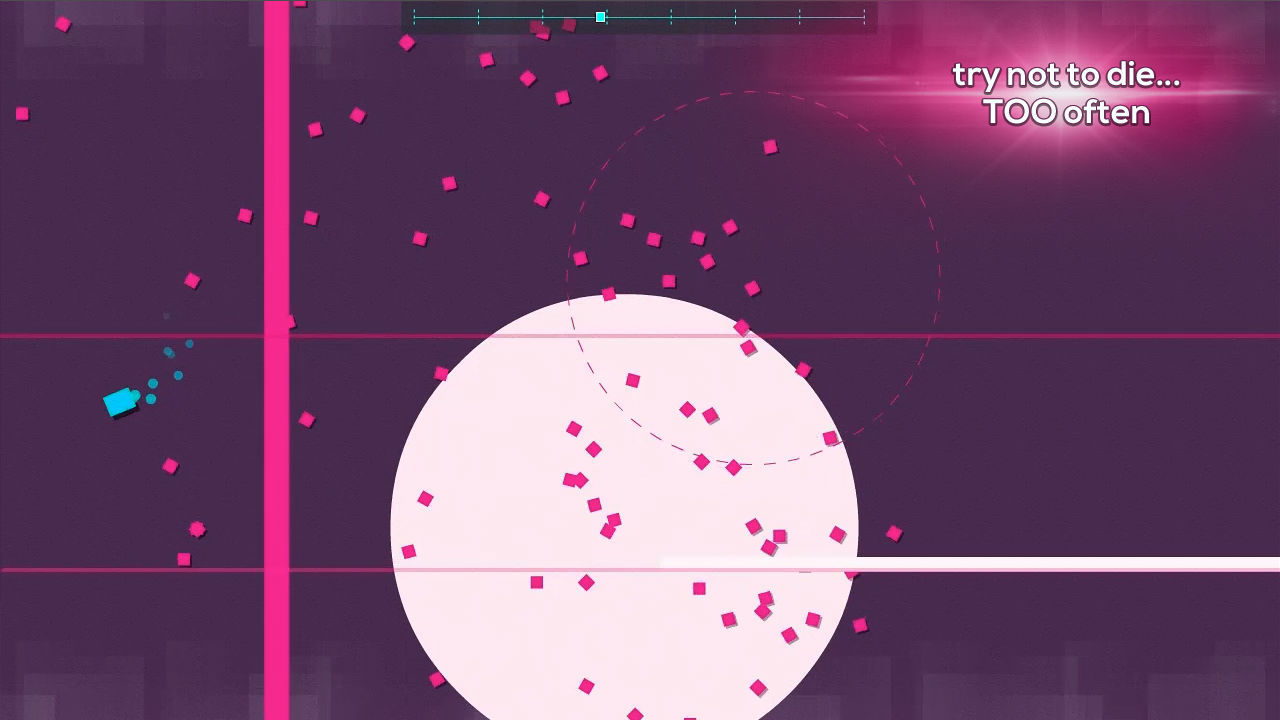 At first, the levels are intimidating. With four people dashing across the screen at once, simply keeping track of what the hell is going on at any given time is no small feat. Thankfully, it isn’t instant-death if you screw up and collide with one of the many, many dangers dancing around. After a few hits, your shape explodes and you’re left helpless until either another teammate comes to your rescue or you drift off the screen and stay dead until the next checkpoint. Only one person needs to survive to win, but keeping teammates alive is the best way to avoid a fatal mistake that would send the whole squad back to the last checkpoint. There’s a certain camaraderie that builds here, even when playing with strangers.

Though it looks closer to a shoot-’em-up, Just Shapes & Beats is easier to get the hang of if thought of as a rhythm game. Dodging constantly with the beat of the music is the way to go. Eventually, the four of us playing the demo fell into the flow of things: movement became less about weaving between small projectiles and instead rhythmic dodging became second nature. It’s impossible to play this game without tapping your foot along to the beat, or even awkwardly dancing a little bit.

We managed to survive all dubstep-filled stages during the demo, and even somehow beat the impossibly hard secret level set to the Mortal Kombat theme at the end of the set. Even so, I’ll probably be dragging my friends to the booth with me tomorrow to play through it again. Unfortunately, Just Shapes & Beats just got hit with a delay and won’t be out this summer as originally planned, but the developer seems confident it’ll be out later this year or, at worst, early 2017.