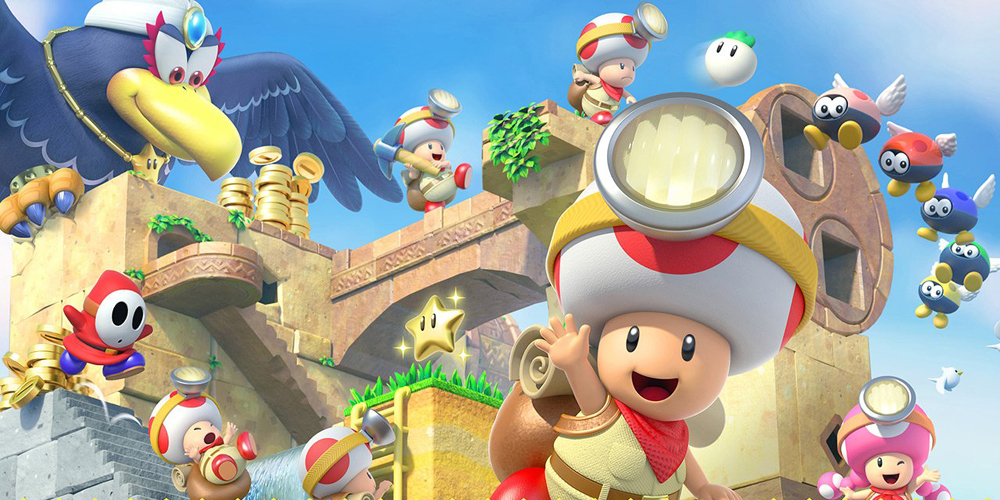 It’s a win/win either way though

[Just Sayin’ is a series where Jonathan Holmes is just says whatever. Don’t even worry about it.]

For some people, new is very good, old is definitely bad, and the latest is always greatest. These people sometimes get annoyed when good games are newly released on old hardware. They feel forced to drag out old hardware that, mind you, they absolutely adored three years ago, but now look at as though it’s a naggy, saggy, draggy, ex-sex partner that they just want to ignore.

Of course, the weird part is consoles don’t age. The New 3DS XL is exactly as awesome as it was when it first launched in 2015. If you don’t like playing games on the console anymore, it’s because you’ve changed. Also, it may be because you got hoodwinked.

The reality is, progress doesn’t happen in a straight line, especially when it comes to Nintendo consoles. The new always outshines the old in many respects, but nearly every time, something is also lost along the way. When it comes to the Switch, a lot of the things I absolutely loved about the Wii U and 3DS were dropped, which is why I still use my 3DS every day, and my Wii U a few times a month.

That doesn’t mean I don’t love having a Switch. Between all the great 1st party titles, top-notch indies, and surprisingly strong 3rd party ports, it has one of the best launch-window-ish (first year and a half or so) libraries out of any Nintendo console ever. That said, if they could find a way to make those games run on a 3DS, I never would have felt the need to stray. Here are a few reasons why. 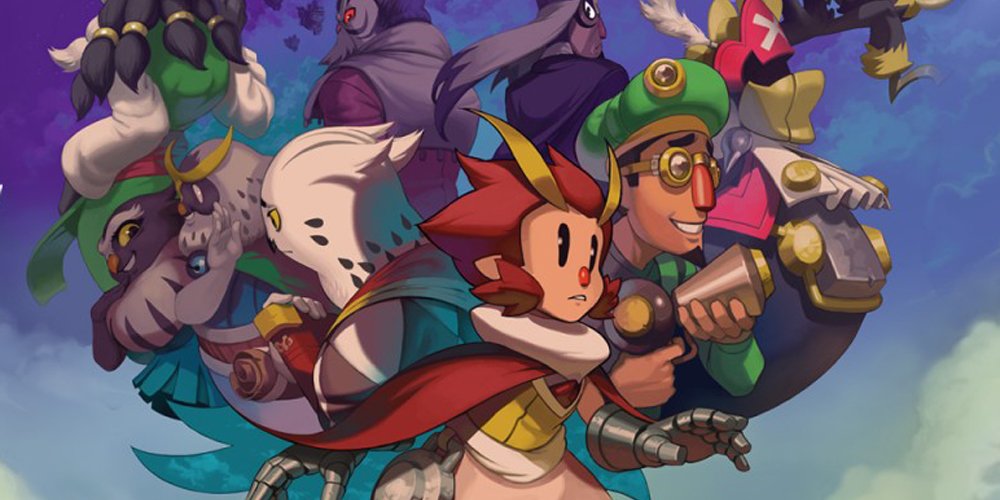 Complaining that the Switch doesn’t have a D-Pad is sort of like pointing the reasons why Trump is unpopular with liberals. It may be valid criticism, but it’s such old news at this point it often becomes white noise in people’s brains every time it’s coughed up.

Still, it’s definitely the number one reason why I prefer playing the New 3DS XL over the Switch. I know I could use a pro controller, but that doesn’t work so great in portable mode while laying horizontally on a mattress, which is how I do a lot of my gaming these days.  I recently ran through Mega Man Legacy Collection again on Nintendo’s new console while in bed, and it was a more distracting and uncomfortable experience than the first time I did so a few years back on the 3DS.

That brings me to my next point. I can play both the Switch and the 3DS in bed no problem, but when it comes to my job, the train, or even the bathroom, the Switch is usually an inferior option. The 3DS fits in my pocket, has a better battery life, and its clamshell design works to protect both screens from scratches that may occur in transit. The Switch has its advantages though. I actually had an awesome 2-player co-op Shovel Knight session with a stranger on a plane last year, coincidentally enough, while I was flying to interview Yacht Club Games for A Profound Waste of Time.

That said, every time I bring the 3DS with me, I am about 7% anxious that something will go wrong. With the Switch, it’s more like 70% anxious. Most of the time, I just leave it at home. 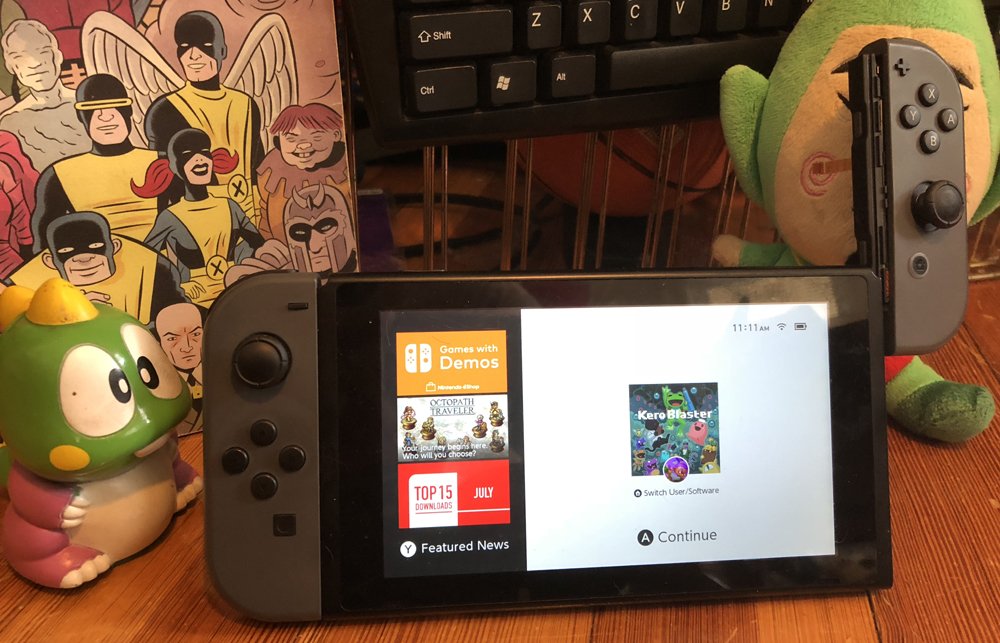 One of the causes of that 70% anxiety is the fact earlier this year, I dropped my Switch from about three feet off the ground while in the bathroom. The tile flooring was not kind. Thankfully, the core system was fine, but my right Joy-Con was damaged beyond repair. Most stores that carry Joy-Con controllers only sell them in pairs, meaning an $80 purchase to amend a two-second case of butterfingers. Luckily, I know someone who worked at Nintendo who could get me a single Joy Con for about $35, but still, you can bet I won’t be bringing my Switch into the bathroom again any time soon.

Here’s a closer look at the damage. I was barely able to get it off. 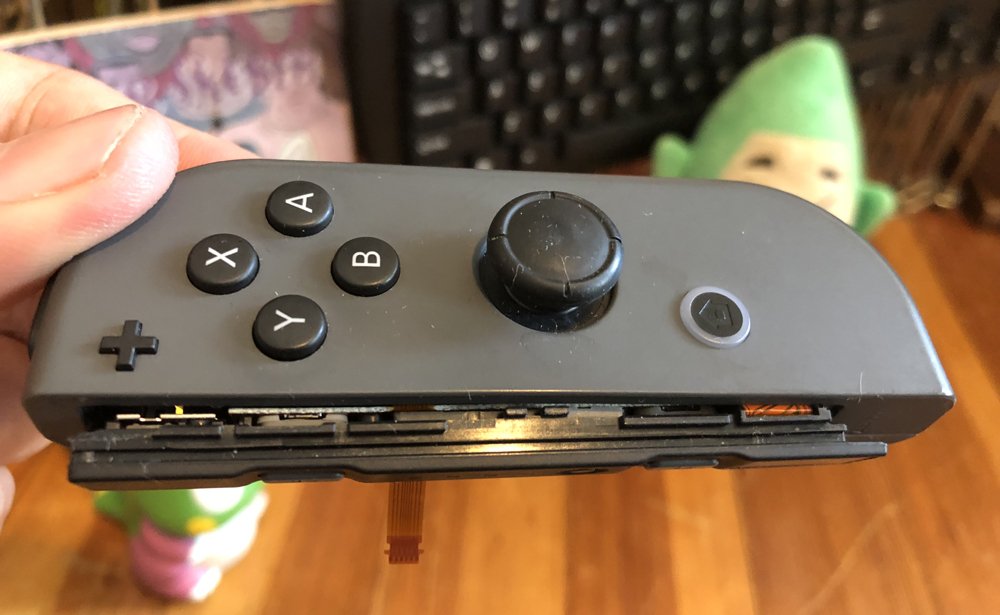 As for my 3DS, it’s become a regular bathroom buddy for me. I’ve actually dropped my 3DS XL from the exact same height and in the exact same place as my broken Switch, and all the console came away with was a corner scratch. 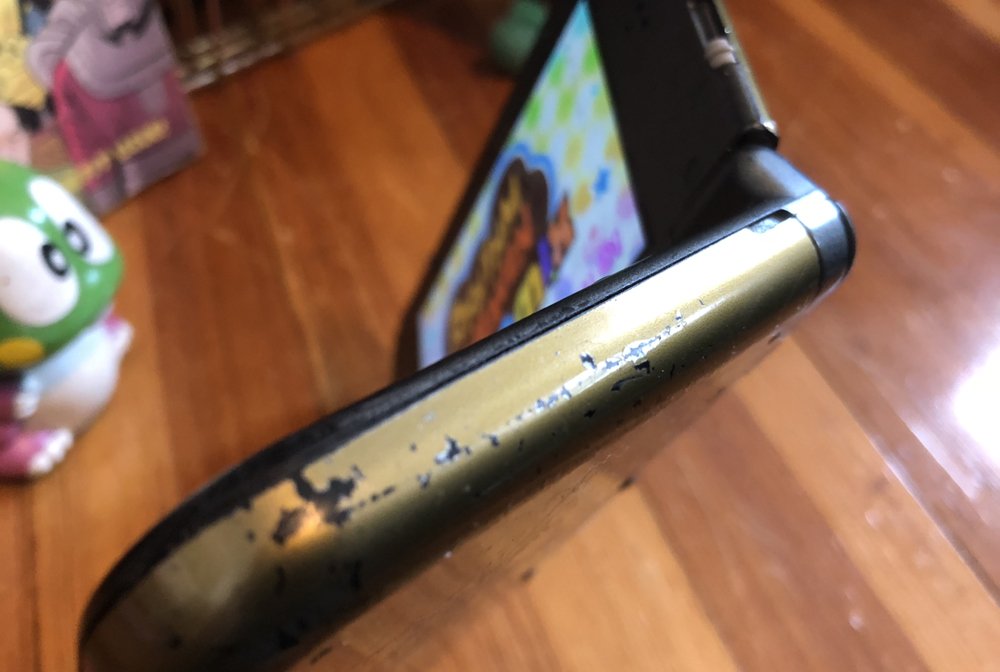 That’s not the first scratch my 3DS has received though. I’ve brought it with me nearly every time I’ve left the house since the console first launched, mostly because I friggin love Streetpasses. While most of the time I end up with nothing, I still snag a few Streetpasses a month and it’s always exciting. I also use the console as a pedometer and make sure I collect at least 10 Streetpass coins a day. It’s like mining a crypto-currency but instead of making real money, I get to hire soldiers in a fake army and also become less fat in my actual body.

If the Switch had Streetpassing, I would definitely invest in a case for it, bring it out more often, and therefore, play it more often. As it is, I haven’t been motivated to take the console anywhere since that previously mentioned trip to meet with Yacht Club Games. 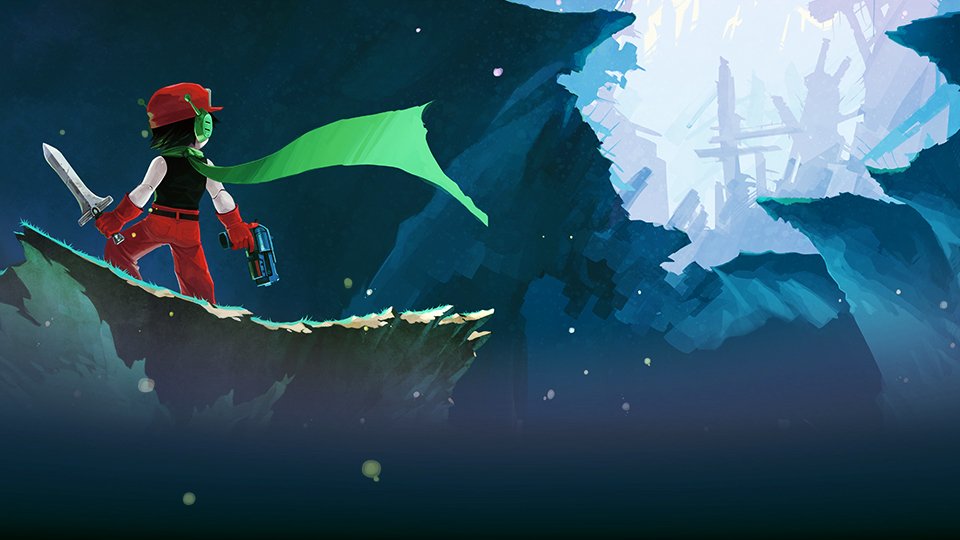 I know that 3D hasn’t been hot since Avatar and that it actually sounds more sophisticated and cultured to say you prefer to not play games or watch movies featuring the 3D effect on them. That said, these are video games we’re talking about. We’re all friends here so there’s no need to put on airs. I’m sure I have no need to fear scorn or ostracization when I tell you games like VVVVVV and Cave Story look really neat with the 3DS effect on. No, not Cave Story 3D. Ironically enough, the 3D effect on that game is hit or miss. It’s the 3DS eShop version, the one using the original PC game’s 2D graphics with optional stereoscopic 3D layers, that looks the coolest.

Nintendo is definitely in a new phase with the Switch, one that’s more about practicality than frills and flair. I think it’s safe to say that under Iwata, the company was more whimsical than it had ever been before, with consoles built around motion controls and touch screens, and games about cats on pogo sticks that can only be played in 3D, or titles you control with your feet and your actual fat.

While I don’t use the 3D on the 3DS that much, knowing that it’s there, and switching it on every once in a while feels like a present from a weird Dad who doesn’t quite understand what I like but he’s constantly trying to give me something new and fun anyway. And that’s actually what I like the most. The fact that he cares enough to constantly try to make me happy, in ways big and small. 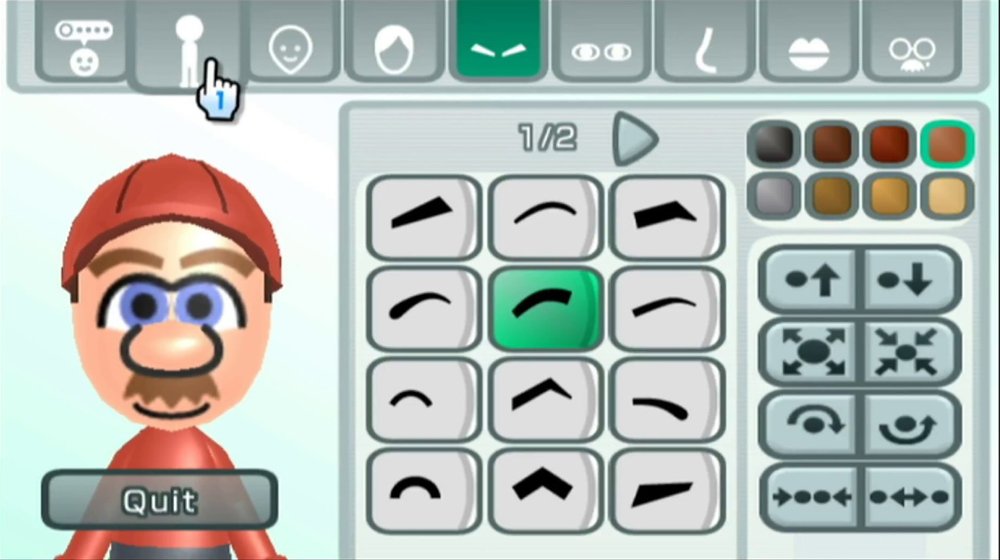 I felt a cold chill in my soul when I first dug into the Switch’s User Interface, finally found its Mii Maker, and discovered it had no music. The original Mii Maker music on the Wii is perhaps one of the most iconic songs in gaming history. So is the Wii Shop Channel music, which I still think about on a regular basis. People used to complain about how long games took to download from there, but sitting there and listening to glorious melody was just as good of a use of my time as any.

Again, the lack of music in these key areas of the Switch experience speak to Iwata’s absence from the console’s launch and make the Switch feel much colder than any of the consoles that debuted under his considerate eye. 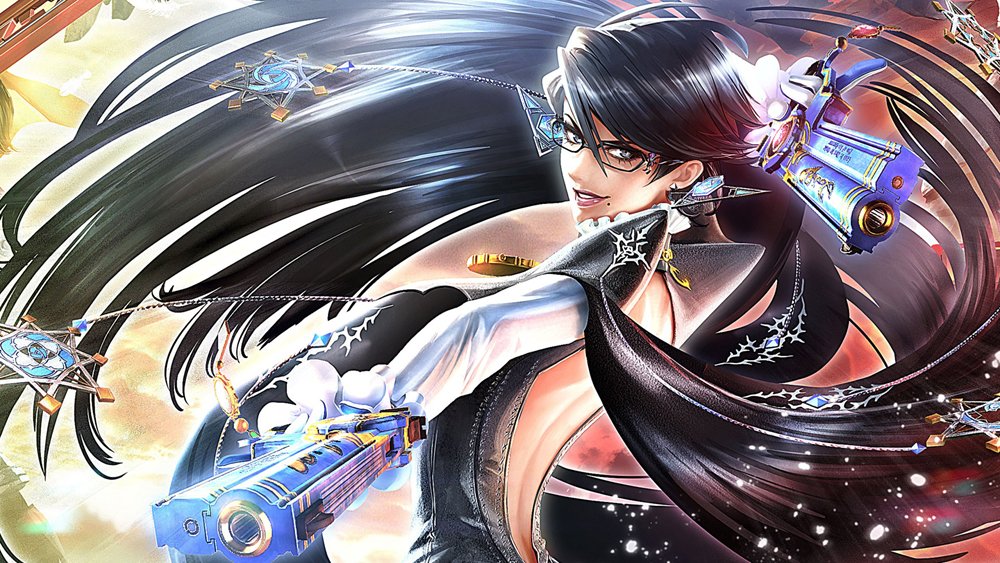 In conclusion, I’m just sayin’ that…

The Switch is a functional, versatile console and I play it all the time. That said, if Nintendo announced that they were making a new New 3DS that played Switch games while keeping all the functionality of the New 3DS XL, I would probably never touch the Switch again. The split Joy Con thing rarely comes in handy for me and I am yet to even bother to dock the console and play it on my TV. And don’t even get me started on how I miss having two screens to work with, or how the Switch appears to be ditching Nintendo’s previously available free online services, previous levels of backward compatibility, and traditional virtual console.

No seriously, don’t get me started. We’d both get super bored almost immediately if I did because none of those things are really lost, and therefore, they aren’t that big of a deal. I still can boot up Smash 4 and play online anytime I want, or jump on the 3DS eShop, listen to the good-but-not-as-good-as-the-Wii-Shop-song music any time I want and luxuriate in the classic Iwata feeling to be found there.

The 3DS is still alive, and it’s still awesome, and that’s all I’m sayin’.