Spider-Man games have had it pretty rough over the years. Some were big hits and some have been bigger flops. Now comes along Spider-Man: Shattered Dimension, and there’s hope for Spidey fans with this newest adventure.

To start, Beenox and Activision looked back at all of the past Spider-Man games to find out what fans loved and hated about these wall crawler titles. They’ve taken that fan feedback, creating this new Spidey game which will span four different Spider-Man universes.

Upon first hearing the Shattered Dimensions announcement, I immediately thought of the classic Fox cartoon Spider-Man with its cross-dimensional Spider-Man team-up. Shattered Dimension follows a similar path with the multiple Spider-Mans, and in this case, the Spider-Mans must reunite the shattered pieces of the Tablet of Order and Chaos. The Tablet was keeping the four worlds from crashing into each other, and now the broken pieces are in the hands of super villains across the four dimensions.

The main thing Beenox took from all the fan feedback research is that people loved the boss fights. Unfortunately, those boss fights were a hassle to reach, especially with the previous games’ open world settings. Shattered Dimension streamlined by being level-based, and each level is designed around the specific villain you’ll be encountering.

In the demo of the Amazing universe, Spider-Man left the streets of Manhattan to track down Kraven the Hunter in the jungle. After battling a number of goons, Spider-Man and Kraven go at it, and we see one of the new features in action. The perspective shifts to a first-person mode during parts of the boss fight, and it almost feels like you’re playing Punch-Out!!. Spider-Man and Kraven box for a brief period before the camera pulls back out, and everything is back to its normal third-person action. 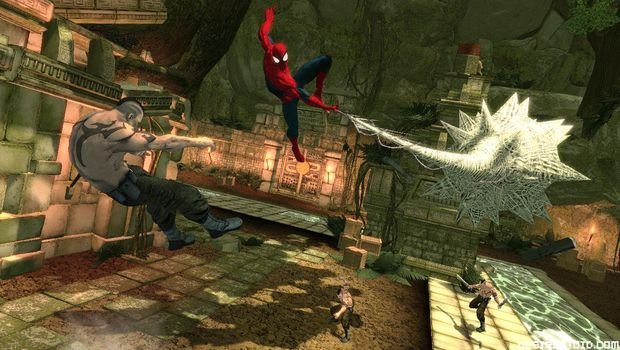 Every dimension’s Spider-Man will act and feel different from the other. Amazing Spider-Man is the classic hero we all know and love. He’s quick, snarky, and loves to use his web shooters. Amazing Spider-Man’s attack style is heavily focused on his webs — he’ll even be able to blind enemies, create web hammers, and whip enemies into each other among an assortment of web-based attacks.

Noir Spider-Man is the complete opposite. This Spidey is more of a strategic fighter, and focuses on using stealth to take on his enemies. He’s older and slower, and therefore has to get his “Batman on” a bit. The Noir section is very reminiscent of Batman: Arkham Asylum, in fact. Noir Spidey even incorporates some extremely badass-looking stealth takedowns.

The preview build we saw was extremely early, but the visuals were already looking very good, especially in the Noir section. The developers are going for a “ink on paper” treatment with the visuals to give everything a more comic book feel. 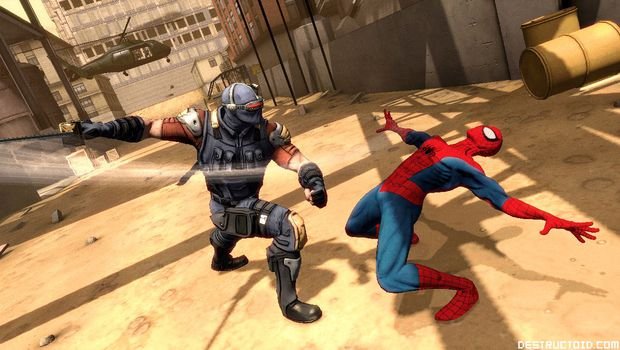 So far, we know of the Amazing Spider-Man universe and the Noir universe, with the other two dimensions to be announced at San Diego Comic-Con and E3 2010. Each dimension will have three levels with four acts in each stage. Every section will feature a Spider-Man villain, so you’ll be battling 12 bosses, plus the one big bad that caused the tablet’s breakage in the first place. You’ll be able to choose which dimension you start off with, as well.

The story in Shattered Dimension is penned by Marvel comic book writer Dan Slott, and Activision is working closely with Marvel to ensure a solid story that comic fans can dig into. Activision is even putting a lot of work into the voice actors on the game. Every Spider-Man voice actor in Shattered Dimension has done the voice of Spidey at one point — the Noir Spider-Man voice actor is actually the same actor from the Fox cartoon series!

We got a very early taste of the new Spider-Man game, and I like what I’ve so far. I can’t comment on the gameplay, as the demo I was shown was early and a bit buggy, but I did enjoy the visuals and where they’re headed with the plot. The only thing that’s left a sour taste in my mouth is the first person fight sequences — it feels forced and unnecessary.

I’ll be looking forward to an actually playable build of Shattered Dimension hopefully by San Diego Comic-Con time. Until then, keep an eye out for a video interview with Beenox coming soon.