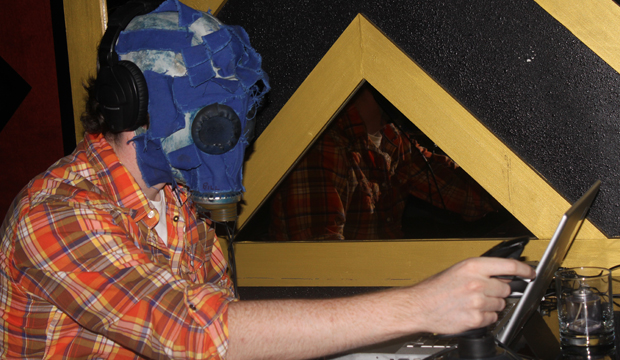 While the Lone Star State’s capital continues to be a hotbed of MMO development, the games industry in Austin has grown well beyond the bounds of the house that Richard Garriott built. Independent developers have slowly been migrating to the city, drawn in by the quality of life, culture, financial incentives, and a growing community of experienced and creative game-makers to interact with. One by one, a critical mass of talent has been steadily building here.

Without the formal backing of a larger organization, indies have traditionally relied on one another for what they need to make successful games. While major studios tend to rely on events like GDC to cross-pollinate, the little guys are constantly in contact for things such as play testing, brainstorming, critique, and best practices for development and promotion. Juegos Rancheros, much like the annual Fantastic Arcade event that it supports and feeds into, is a coming out party for the Austin indie development scene.

What began as an informal group of people hanging out, eating sushi, and talking shop has become a monthly event geared to bringing public awareness to the creme of the alternative gaming crop. As an Austin local and a huge fan of diversity in gaming, I must admit that covering the kick-off event with Allistair Pinsof (big ups on the video work) this past weekend has released a hefty dose of dopamine into that part of my brain devoted to pondering the future of games. 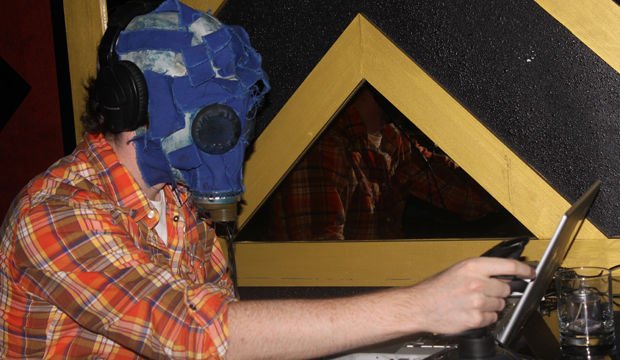 Before it ever had a deliciously silly name and a purpose, Juegos Rancheros was a small gathering of developers like Adam Saltzman (Canabalt), Renegade Kid, Twisted Pixel, and a few others. In a similar genesis story to other gaming collectives (like Toronto’s Hand Eye Society), as more and more developers such as Tiger Style and Arkane joined the mix, it became clear that there was an opportunity to not only network with one another but with the community at large. So, when the owner of the Highball and Alamo Drafthouse contacted IGF chairman Brandon Boyer to quarterback a gaming event under the Fantastic Arcade banner, it was really a no-brainer.

The event began with an introduction to the Juegos group and when Brandon asked who in the crowd had games to show, hands shot up across the ballroom. When the formal part of the show was over, developers and locals interacted and demoed games on iPhones and even in a VR-configured gas mask (Robin Arnott’s Deep Sea). Before that, however, Brandon continued with a short segment titled A Fistful of Indies, a list of the best indie offerings released over the past month. Unsurprisingly, Capy Games got all kinds of love, as both Superbrothers: Sword & Sworcery EP and Might & Magic: Clash of Heroes (my current obsession) topped the list.

Headlining the event was Twisted Pixel showing off their latest build of The Gunstringer. After a short introduction by Jay Stuckwisch, they immediately began pulling people from the audience to play the game on a giant screen in the ballroom. Seeing the Kinect tech in successful action in such a huge open space and watching how responsive the game was at this stage of development was impressive. People continued to demo the game (including Dtoiders like djnealb pictured below who represented) for the remainder of the event as people began to mingle. 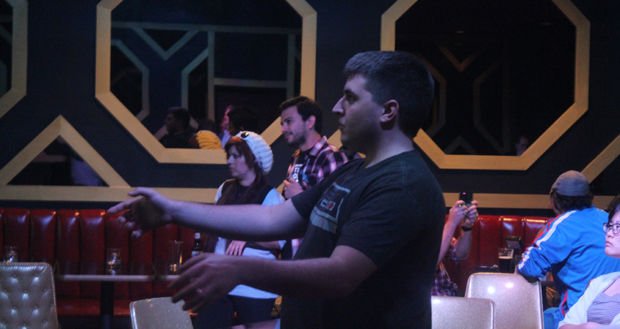 Speaking to Mike Wilford and Jay of Twisted Pixel later, they cited a number of reasons the relocation to Austin was the right move for them as an independent developer. Tax incentives, the ability to lure talent to the city, the proximity of other talented developers, and the city itself all made the list. However, the primary reason for their decision quickly became clear. Mike fessed up, saying “We have the best tacos here”. I have to agree with him on this important point. He even mentioned that The Gunstringer makes a reference to Torchy’s Tacos, a local dive with killer food.

So where does Juegos Rancheros go from here? Brandon Boyer and Adam Saltzman stressed to us that the goal wasn’t necessarily to provide an event for indies in Austin to network — that’s already happening. In their minds, the end goal of the event is to raise awareness with the community at large. They’re hoping to arrange for arcade cabinets to showcase a rotation of Austin indie games, in the same vein as the Torontron.

They see a great potential for game development to gain inspiration from established artists, musicians, writers, and other mediums in Austin. The success of recent games like Sword & Sworcery only reinforces the potential of this approach for them. If they can build a bridge to facilitate more collaboration between indies of all types, they’ll consider Juegos Rancheros a mustachioed success of Sam Elliott proportions.