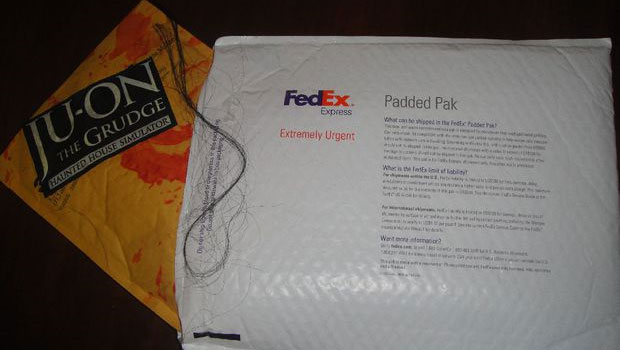 Well, our review copy of XSEED’s JU-ON: The Grudge for Wii showed up yesterday, and… yeah. Where do I start with this one?

Stuffed inside an innocuous-looking FedEx package was a manila envelope, covered in blood and a JU-ON sticker. Oh, did we mention there was bits of hair sticking out of it? Pulling the envelope out of the package, the hair got twisted and stuck to my hands. As if that weren’t disgusting enough, I reluctantly opened the package to find… a gigantic clump of bloody wig hair.

Also of note: the game itself was wrapped in bloody bandages, and XSEED also included a small, white box covered in blood. What’s in the box? Hit the jump to find out.

Yup, that’s a AAA battery and a key. From what I’ve been told, a key gameplay element of JU-ON involves collecting batteries for your flashlight. You’ll need that to see as you move around the game, what XSEED is calling a “haunted house simulator.”

The key? I have no idea. It doesn’t open anything in my house, and trust me, I tried everything. Keys, however, are traditionally scary as crap. Right?

Keep your eyes peeled soon for our full review of JU-ON: The Grudge, which is in stores now, sans bloody wig hair.

Filed under... #Survival Horror#What the hell was that?