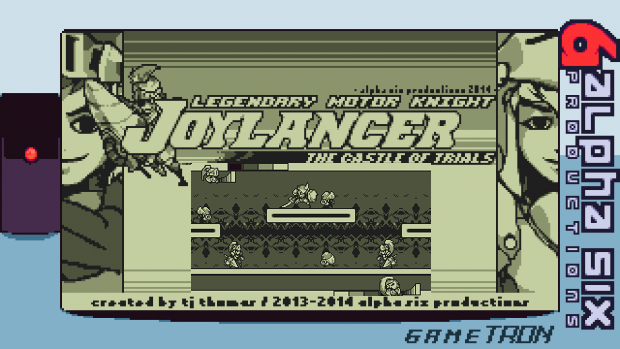 Stab, dash, and rocket with joy and violence

Legendary Motor Knight! Joylancer is a new series by game developer and musical artist T.J. Thomas. Fluid action and muilt-purpose maneuvers appear to be the focus here, with titular “joy lance” (a motorcyle-lance-drill hybrid) being the real star of the show. Your lance works as both your primary form of attack and enhanced mobility. While the planned series is still in a relatively early in development, it’s clear that there’s plenty of potential here. I’ve even heard tell that a fully color version may be coming down the line for those that are less quick to love the Gameboy-style visuals.

Check out a dynamite description of Joylancer below, and look for The Castle Trials (the first game in the series) by mid January.

Legendary Motor Knight! Joylancer and the Castle of Trials is a sidescrolling action platformer. as the Legendary Motor Knight “Joylancer”, Joy Lantz, you’ll play through a huge arrangement of “trials” inside of a castle. There’s a lot of focus on keeping control simple by using a 2-button control style: your jumping button, and your lancing button.

The most important thing in the game is the giant motorcycle-lance-drill hybrid that the game gets its name from. The Joylance is not just your primary method of attack, it’s also your means of travel. A normal lance attack has fairly short range and can be used multiple times in quick succession, but lacks power. If you hold Down (acts as a “pedal” button) and repeatedly press the lance button, you’ll rev your lance and charge power into it, up to a maximum of 4 levels. Depending on your lance level, your lance attack will increase in power and propel you forward, which is increased in effectiveness if you lance in the air. as long as your lance is at least at level 2, you can also use it to perform super high jumps that also attack everything above you, or perform high speed ground drops that can attack everything below you.

Another thing: charging up lance energy has its benefits even when you aren’t lancing, as a higher lance charge will increase your overall running speed, which can help you jump huge gaps without using lance energy, but can also make platforming a little harder to control…Joylancer is a game that is 100% about risk and reward, and using what tools you’re given to succeed in a wide variety of challenges and obstacle courses…

The Castle of Trials is broken up into 4 types of trials: Novice Trials, Time Trials, Crystal Trials, and Special Trials. Novice trials are pretty simple, you just have to get to the goal. They’re mostly to teach you how to play the game, but there’ll definitely be plenty of challenge scattered around. Time trials require that you go from start to finish before time runs out. Crystal trials require you destroy and collect various amounts of crystals in order to complete the stage. Special trials are a large variety of unique trials that each have their own gimmick, and will be where all the really fancy levels hide out at. The Castle of Trials is also going to include a special extra mode called Joylancer & Gracelancer where you and a partner can play special 2-player levels and challenges as Joy and her sister Grace. Joy and Grace play the same but have slight aesthetic differences. you can work together to defeat enemies or face off against each other in …MOTOR-JOUSTS.