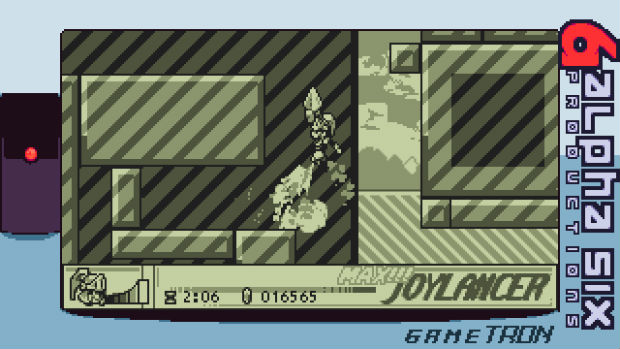 When you look at Joylancer, what do you see? A monochromatic Game Boy visual style, no doubt. But when you start to peel back the layers and actually play the game for yourself, it becomes so much more than that. Even though it only has two buttons to its name, it somehow manages to capture the spirit of some of the best 2D action games on the market.

Even though Joylancer technically looks “old,” the gameplay is anything but. Everything runs incredibly smooth, which is a good thing considering how technical some of the abilities can get. Although one of your two buttons functions as a simple “jump,” your other key will control all of your lance abilities — of which there are a few.

The main character can not only use her lance to attack enemies in standard fashion, but she can also “rev it up,” by holding down on the direction pad and pressing the attack button. From here, you’ll be able to prep up to four bars of power, which lets you use a horizontal air dash ability, or a vertical leap. You can also use a downwards slash akin to Zelda II: The Adventure of Link, and the more you’re charged, the faster you’ll run.

This creates a unique strategic situation where you’re constantly deciding when to use up your bar, and when to keep it to dodge accordingly and make your way through a particular area faster than normal. You can also use your lance to engage other contextual bits throughout stages, like riding on tiny trains or bursting out of barrels, Donkey Kong Country style.

One of the only problems I have with Joylancer is that it doesn’t really have a whole lot of variety in terms of the enemy selection — there’s only a few on offer. Instead, the game seems to be focused on getting through the labyrinthine-like stages, and learning how to use your powers properly. All in all, it reminds me more of a Mega Man X-like game than an original Game Boy title, and for those who are curious, controllers are supported “out of the box.”

You can check out the demo on the game’s website today, or pre-order it for $5. If all goes well, it’s set to release later this month.