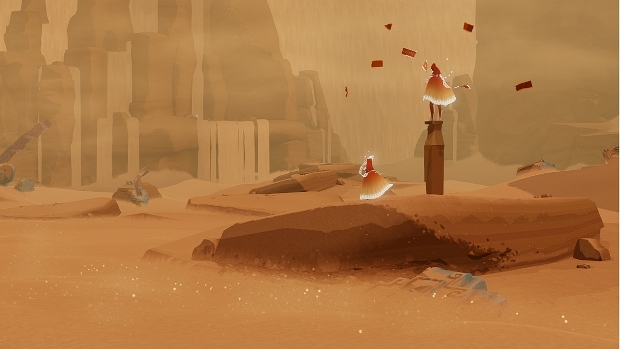 Some notes and tidbits from Jenova Chen?s insightful GDC talk on Journey

thatgamecompany founder Jenova Chen delivered a talk on Journey, right on the heels of a sweep of the Game Developer’s Choice Awards the night prior. Naturally, the room was packed full, and Chen received a lovely standing ovation at the end. Some people in the audience even went misty-eyed as Chen rounded out his presentation with some fan mail from a young girl who wrote about playing Journey with her father before she died of cancer.

When considering the state of online multiplayer games, Chen felt there was something missing. He talked about being busy with school and having no social life, instead turning to gaming as a substitute. While in the throes of World of Warcraft in 2006, before forming thatgamecompany, he noted: “The more I played this game, the more people I encountered, the more I realized I had no connection with any of these people. They just reminded me I’m a lonely person.” Just the humble and sincere delivery of that last line made me want to give Chen a hug.

Chen found the existent system of multiplayer and connectivity failed his search for emotion and relationship building, often due to design conflicts. Item and armor created visible, often times impenetrable hierarchies. The need for resources, like loot, led to in-fighting and competition rather than cooperative play. “Another thing I got annoyed was that people would always check if you’re a guy or a girl in these online games,” Chen added. “I wanted to see a world where everyone is the same.” 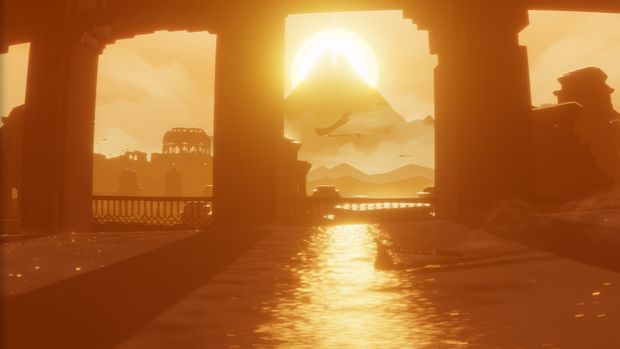 Designing this new idea from ground up, then, was a highly iterative process. While prototyping with co-op play, “Sony kept telling us the game could have great multiplayer, but it needs to have single-player.” Concepts were thrown together in 2D to explore how to deal with cooperative play, many of which failed to translate into 3D. Initially, the multiplayer could include up to four players, but play testing showed that caused pairing schisms; or, worse, three players leaving the fourth out.

Early concept art for Journey is decidedly more intricate than the final result, but much of the game’s framework was set down immediately. The issue was pacing. After the second year of development, the game was effectively done. The trailer from that milestone would closely reflect the final trailer, but the entire last third of the game needed to be reworked to provide appropriate catharsis. An entirely new set of animations was created for the last third of the game in an effort to convey its message more accurately.

Initially, Journey’s playable avatars were entirely humanoid, looking more like ninjas or as if they were students going to kendo practice. This was eventually pared down, as were much of the game’s systems. Matchmaking was removed so people wouldn’t get irritated they couldn’t chat with their friends. Soon after release, people would post messages to their unknown companions on the forum, apologizing for disconnects or thanking them for making the journey with them. 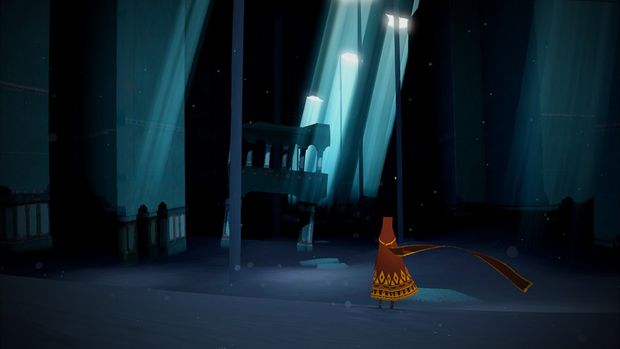 When he met the man who drove the first lunar rover, Chen asked him about the experience. The reply was, “On the moon there is nothing. There is no sound because there’s no air. And the earth is so small…you’re on this strange place where there’s nothing and no sound. You can’t stop but thinking ‘Why?’ ‘Why are we here?’” Journey allows you to share that pensive isolation with another, though it also works perfectly well as an offline, single-player journey. It captures the same widespread isolation and sense of existential curiosity so well.

Chen opened the talk explaining how other mediums define their genres based on the feeling a piece evokes, whereas games, in a holdover from the more simplistic past, define genres based purely on mechanical systems. He also noted how he tired of power fantasy games as he grew up, noting “if there are a variety of feelings in entertainment, it will make gaming a more healthy medium,” all of which I agree with. The larger part of the industry is heavily skewed toward escapism and power fantasy, less concerned with emotion than re-skinning the same tried and true mechanics.

Toward the end of the talk Chen puzzlingly pondered whether or not the extra year of development, which marked the second time they pushed the game back, was worth it. If you remember, the team eventually had to put up its own money to finally get Journey out. Yet, with all the (well-deserved) awards and critical acclaim, I think the answer is evident. Perhaps it was a rhetorical or perhaps it was the result of Chen’s humble, affecting personality.

Anyway, at the end I stood in applause.