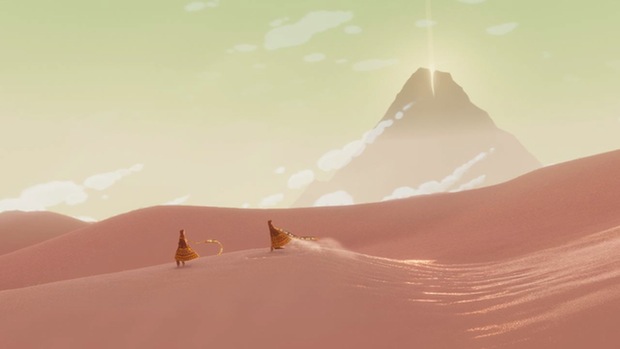 Jenova Chen admitted to being “a nerdy guy that likes to stay at home” during his D.I.C.E. Summit 2013 talk on Journey, but he still wanted to connect with others, and hoped he could do so in MMOs like World of Warcraft. But the connections he wanted to make were emotional, and he was finding that players of MMOs only wanted to talk about beating the boss, or gathering resources. No one had interest in making friends or sharing feelings. Chen said that the more he played the more lonely he felt.

He started to dream of a online MMO where players were all the same. There were no differences in armor, gear, or levels. Everyone in robes. No indication of sex or age. He wanted to focus on the relationship between two human beings.  This was the start of Journey.

After thatgamecompany’s flow and Flower, Chen wanted to tackle problem of online games and this lack of emotional connection. He believed that it was possible to find a deeper, stronger emotional that adults can relate to. Looking at online games, thatgamecompany changed threw out everything that would hinder a pure human connection, ditching everything from weapons to voice chat, as they deemed them to be distractions. Sony pushed for an online invite system for Journey, but they were against that too. They spent the first year trying to hone in on the perfect formula of game elements that would have players wanting to play together, and not against each other.

After more than three years of work they’ve done it. Journey, one of last year’s most celebrated games, is probably one of the most emotional games ever made, and it continues to make connections between players without the use of lobbies, quests, loot or any of the other online conventions. No one has to worry about chat headsets, latency, online names, avatars or chat. They did all the work so that players could focus on the emotional connections.