Swim with the fishes

Decades of classical conditioning have trained us to abhor water levels. The likes of Super Mario Bros., Sonic the Hedgehog 2, and Ocarina of Time hold strained memories of great games gone awry, if just ever-so-temporarily. We’re Pavlov’d into panic when air is fleeting, the music turns tense, and we can practically feel the crush against our avatar’s lungs. It’s Video Games Bad Times 101: Different song, same chorus.

Giant Squid’s Abzu flips the script on a setting whose earmark is a constant sense of dread and imminent failure. What else would you expect from Matt Nava, who was the art director on Journey and Flower? The entire game is about the sea (the name literally means “to know water”), but it’s also about exploration. There’s a whole new world to uncover once you break the surface of the water. 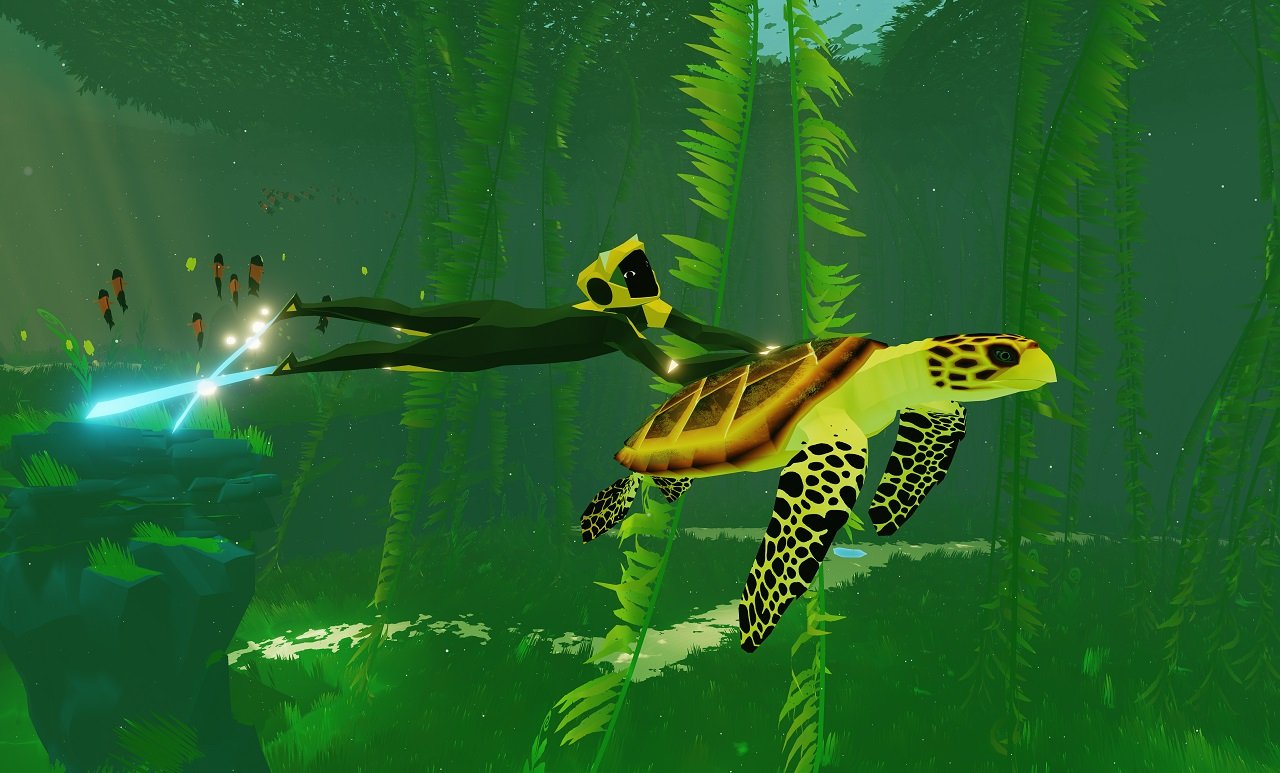 Giant Squid wants you to experience this underwater world at your own pace. The scuba-equipped protagonist has no concerns for oxygen; he’s prepared to flipper-kick to new depths for as long as it takes. And, honestly, it might take a while, as Abzu‘s structured in such a way that you won’t know always which direction to go. Even when you do, scouring every corner to absorb as much of this living environment might seem like the better route, anyway.

Before long, that exploration turns semi-mandatory in an unforced sense. Buried in the ocean floor are drones that need unearthing. These little guys follow along your periphery and grant you small “upgrades” (so to speak) such as the ability to swim a bit faster. Most importantly, though, they’re required en masse to clear some obstacles and open up new areas of the sea.

While the game maintains a linear progression, no two players will ever know Abzu in the exact same way. The outline of the world remains constant, but all plants and sea life are randomly generated. There’s a framework about the scenery that’s easily to pick out, but the living inhabitants will be mostly unique — although, I’m not convinced it’ll matter much. Once you get lost in the semi-open areas, all these could be static, and it’d feel just as fantastic of a setting.

Of course, there will be some about Abzu that’s scripted. Toward the end of our 15-minute demo, a shark attacked one of our drones and sent him careening to the ocean floor in an unrepairable state. These set pieces seem as if they’ll punctuate Abzu semi-frequently — just often enough to assert itself as a guided experience to some degree.

That shark attack was an example of how Giant Squid aims to carry over some of the tension that water levels are infamous for; after all, Abzu is nothing if not a giant water level. Speaking with Nava, he told us that this won’t just be an underwater frolic. Although there are plenty of stretches of serenity, that isn’t all the player will feel. Nava saysAbzu aims for moments that instill fear, dread, and stress, but it’s a delicate balance. It’s a given that with Austin Wintery working on the music, the score should greatly enhance whatever feeling the gameplay strives for.

Nava had no qualms talking about the emotion of Abzu, but it’s unclear what long-term stakes those have. The game has no death state, so poor performance can be “punished” by loss of drones which means swimming slower. The better odds are that the emotion ties into narrative, which Nava wasn’t as comfortable elaborating upon. He spoke mostly in vagueities about nebulous concepts like finding resources. It’s apparent that Nava wants Abzu to be an experience where the player slowly unfolds the game’s meaning through playing — not through an interview months prior to release.

It’s almost a given that Giant Squid has something weighty waiting in the depths of the ocean. That’s a safe bet just knowing the track record of the creators. Whatever it is will be a reprieve from what we’re used to when video games venture underwater. However, there’s still a fair chance whatever’s down there will ring those Pavlov bells in our mind, just in a completely altered way. Same song, different chorus, really.