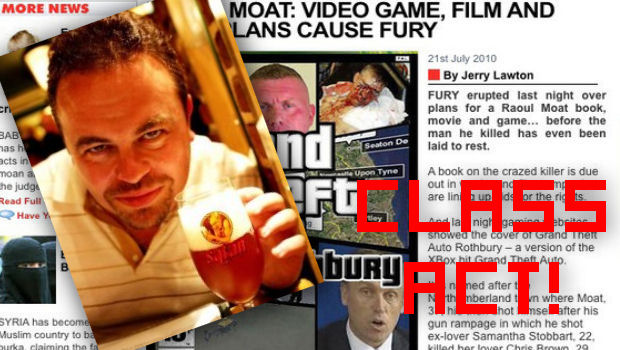 After writing an article full of lies, deliberately upsetting the relative of a murder victim, and generally ruining the name of his entire industry, you’d think the man responsible for the tasteless Grand Theft Auto: Northumbria story would be remorseful. He was not.

Faux journalist and twat Jerry Lawton is the man responsible for vomiting up a Daily Star article that falsely claimed Rockstar was planning to make a GTA game based on real-life murderer Raoul Moat. On his Facebook page, the man expressed surprise and contempt for anybody who thought that what he did was reprehensible, making sure to betray his own low opinion of gamers in the process.

“Baffled by the fury of adult gamers,” writes Lawton. “These are grown (?!?) men who sit around all day playing computer games with one another who’ve today chosen to enter the real world just long enough to complain about my story slamming a Raoul Moat version of Grand Theft Auto! You would think I’d denied the Holocaust!!! Think I’ll challenge them to a virtual reality duel….stab….I win!!!”

Nice to see that Lawton conveniently left out the bit where he used a poorly doctored image that any idiot could have ascertained was fake, the bit where he used a 69-year-old grieving grandmother for his own ends, and the bit where he cobbled together a shitty little article full of lies that got taken down because it was a load of crap. Hilarious that he references the “real world” when his article was based in total fantasy to begin with. Maybe Lawton’s the one who needs to step away from his computer and face reality.

You are baffled, Lawton, because people in the British shitrag press are rarely held accountable for their irresponsible writing. This is what it feels like to be exposed as a terrible, sleazy, dreadful, parasitic little man who writes for The Daily Star. That fact you don’t even have the dignity or class to apologize for being such a disingenuous writer is what should be baffling you, mate.