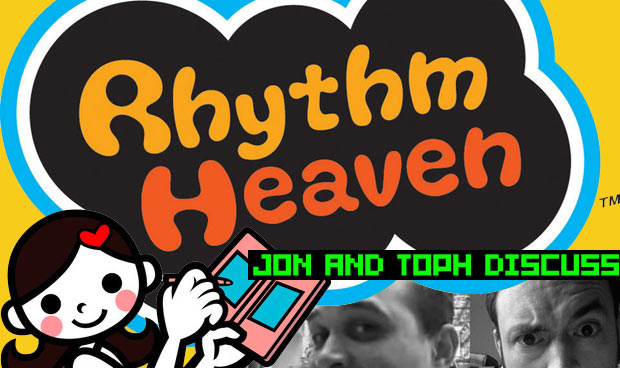 When I found out at E3 last year that Rhythm Heaven was actually coming to the US, I couldn’t have been happier. Wii Music may have been bland and forgettable, but I could forgive Nintendo for that, because bringing us one of the quirkiest, most non-American rhythm-action games more than makes up for it.

That’s how I felt at first. Then I thought about the fact that NoA would have to actually translate the game’s lyrics into English, and I got worried. Much of the game’s charm comes from its passionately sung, yet wholly ridiculous pop songs, and screwing them up could be almost game-breaking.

Rhythm Heaven‘s street date has been broken, and videos of the game’s newly translated songs are already hitting YouTube. Topher Cantler and I are here to chime in on topic. Hit the jump for our discussion, as well as video of Rhythm Heaven‘s new English vocals in action.

When I imported Rhythm Tengoku Gold (Rhythm Heaven‘s Japanese name) just before E3 08, I felt sort of stupid afterward, knowing that the game would later be available everywhere for about half the price of the import. Now I don’t feel stupid.

I don’t feel stupid for importing it, either. In fact, I don’t feel much of anything at the moment but angry. This dub might be the worst thing I’ve ever heard.

I will accept this as punishment for the sins of mankind. That’s all I can come up with. It’s so unfathomably horrid that I don’t believe Nintendo could have produced such a perfect form of torture on their own. They’ve enlisted the help of demons or something.

I think that’s a natural reaction, especially on first listen. After watching the video a few more times, though, I actually don’t think the frogs sound too bad. At least they still seem into it. Those female vocals, though — what the hell happened? They almost sound drugged. How could you sound that bored and dispassionate when singing for a game that will likely be played/heard by millions of people? Are these girls even professional singers? They sound like ass!

When I first heard that Beyoncé was involved with promoting Rhythm Heaven, I was worried that all of the game’s English vocals would end up being too showy, too R&B. Now I’m actually wishing they got Beyoncé to sing on this game. At least she’s got spunk.

Beyoncé would have at least been listenable. Hell, I’d take Bea Arthur’s rendition of the Window Girls song over the crap I’m hearing in that video.

Admittedly, the frogs don’t trigger instantaneous and explosive vomiting the way the other dubs do. But still, why did that need to be changed? Half of this game’s appeal is its quirky Japanese soul, and that’s been ripped out of it. I understand that they want to appeal to an American audience with this, but did they really need to change the music? There was a great opportunity here to introduce the broader demographic to something wonderful, and they blew it.

It’s like wanting to bring sushi to American foodies for the first time. Sushi is great the way it is, because it’s Japanese and the eastern flavors are what make it sushi. This is like removing the yellowtail and avocado and replacing it with bits of hot dog and Twinkie to make it “more suitable” for American taste buds. Lots of people are going to try that and think, “Man, sushi is disgusting,” when they might have really liked the “un-fucked-with” fish version in the first place.

I don’t want to get too off-topic, but the points you’re making are leading me to angry feelings towards NoA in general. They make so many baffling, irritating moves, like ignoring Fatal Frame IV, ditching Captain Rainbow, giving Kirby angry eyebrows on his American box art — so may asshat moves.

Honestly, I don’t know if it’s really NoA or NoJ that’s making these decisions; all I know is that someone big at Nintendo doesn’t appreciate the universally charming appeal of their own products.

It’s a widespread problem that plagues a lot of Japanese localization efforts. Remember how long it took for someone to bring Dragon Ball Z to the states, or for Miyazaki’s movies to be brought to American theaters? These are all Japanese properties that have obvious international appeal, but the dudes with the money and power to localize them didn’t seem to think so for years.

Back to the point, I just watched the video again; holy fuck! The Fan Club vocalist is AWFUL. She really can’t sing. Is she a relative of a bigwig at Nintendo or something? This just doesn’t add up.

It’s like they’re not even trying, and you make a great point in saying that Nintendo doesn’t appreciate the charm and greatness of its own products. I enjoyed the Japanese version of this game so much that this only feels like a terrible injustice to it. In all honesty, this game’s been cheated out of what it deserves.

You know what it sounds like? It sounds like bad karaoke. Like when you walk into a bar and hear familiar background music, but the vocals are done by some paralegal who’s had one too many appletinis. It’s really shameful and embarassing, especially when the monkeys are still going “hai, hai hai” and there’s this bored, uninterested “yeah, yeah, yeah” leading them into it. You know that disgruntled face the other monkeys make at you in that stage when you screw up? They should be making that face at the singer on stage every time she opens her mouth.

For a lot of people, Rhythm Heaven is going to be their first taste of those “wacky Japanese games” they’ve been hearing so much about, and what they’re getting isn’t the real thing. And yeah, it is that important when the shitty vocals change the whole feel of the game. It’s just not fair to anybody involved.

I’m still holding out hope that some of the other new vocals will be better. There is that kick-ass song that plays while the karate guy attacks defenseless boulders in the snow, and of course, there’s “SCRATCH-O.” Maybe those won’t be screwed up, but at this point, I’m prepared for the worst. Rhythm Heaven won’t be the triumph that it could have been, and instead will be just another thing for longtime Nintendo fans like myself to bitch about. At least Nintendo didn’t make the DS region-locked, so people who want the real Rhythm Heaven experience won’t have to work too hard to get it. Still, they shouldn’t have to go that far. The fact that they didn’t include English and Japanese versions of Rhythm Heaven‘s songs makes me a sad panda.

Speaking of region-locking, the original Rhythm Tengoku is on sale at Play-Asia until the end of March.

But yeah … next time, Nintendo, save the money that you spent on getting Beyoncé to pretend she likes your games and put it towards getting real English vocalists. Rhythm Heaven Wii is pretty much a sure thing at this point, and if you spend all your locilazation budget on getting Hannah Montanah to pitch it, while giving the actual in-game songs to your lawyer’s daughter to sing, I’ll poop on my Wii and send it you in the mail.

The only hope I’m holding onto is that there aren’t any other new vocals. But, as is the case with a lot of Nintendo’s recent activity, hope is probably not a wise thing to bring into the equation at all. This is why I started importing games all those years ago. “All your base are belong to us” was probably something really dramatic and intimidating in its original form, instead of the legendary joke it’s turned into after being badly translated. Same goes for too many games. Once again, western gamers are ending up with a much shittier version of something that used to be great, and most of them won’t even know what an awesome thing they missed out on.

You know, it really doesn’t help that I was in the middle of flossing my teeth when you sent me that link. I was already feeling irritable. Why’d they mess with one of the best things they had going for them this year? Maybe I’ll send Nintendo some poop, too. They sure as hell send us enough of it here in the states.

We are two bitchy men CONFIRMED.

As for hope, I can always remind myself that in the future, all games will be accessible to everyone all the time. Digital distribution has already been successful in giving me Sin and Punishment on the Wii VC and a translated version of Mother 3 on my my Wii Homebrew channel. Hopefully, it will make all international boundaries a thing of the past.

Until then, though, we have to deal with crappy localization efforts like this one.