The original Joe Danger was one of my favorite games of 2010. In fact, I got 100% completion in it after playing pretty much non-stop for a couple of months. I just fell in love with the combo and points system, the level design, and of course the art. Needless to say, when Hello Games announced Joe Danger: The Movie, I was pretty excited.

I finally got to lay my hands on Joe Danger: The Movie at PAX East and I had a blast. I got to play a variety of different worlds on various vehicles. I was really surprised at how many different vehicles are included in the game, especially since the first game never left the motorbike. Each of the vehicles played differently enough that I had a slight readjustment period while still maintaining a sense of familiarity throughout.

Instead of just a simple motorbike, you’ll now be riding on mine carts, skis, a jetpack, and more throughout Joe Danger: The Movie. They all have their unique little quirks to get used to. For example, on skiis you can’t do a wheelie like you would on many of the other vehicles in order to keep your combo going and get a 100% combo on the level. Instead, you have to rely on using your ground tricks in between jumps to maximize your points.

I did play some of the more traditional levels and felt right at home. I quickly fell back into my old habits of restarting the level as soon as an imperfection in my run arose. I was comboing the entire level without even thinking about it. I had no issues with the systems at play in the original Joe Danger, so to see them largely untouched here made me happy. 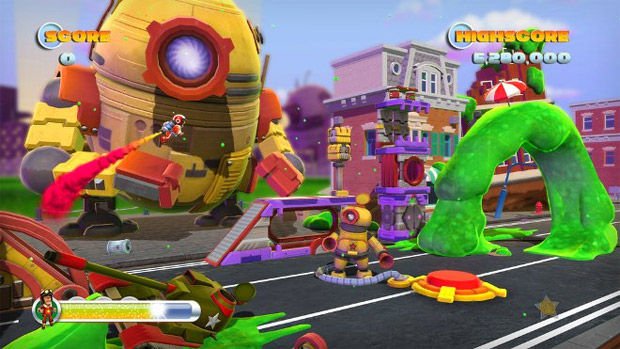 Perhaps the most important thing returning from the original is the difficulty. I played some of the later stages of Joe Danger: The Movie and let me tell you: they were TOUGH. I haven’t played the original in quite some time so I’m not sure how it compares directly, but there were certainly some very tricky parts and goals to take care of in certain stages.

The goal-oriented gameplay also makes its comeback, with each level giving you a variety of goals to accomplish during your run. You can choose to do them one at a time, but if you accomplish every goal in a single run you earn an extra reward for your hard work. Looks like I have my work cut out for me on this one.

Joe Danger: The Movie seems to be more of what I loved from the original, except with a much greater variety. I only had a hard time controlling the jetpack during my limited time with the game, but I’m pretty confident that the learning curve is just steeper than the rest of the vehicles. When I was done, I left the Hello Games booth with a large smile on my face knowing that the Joe Danger that I’ve come to know and love will be back and better than ever.