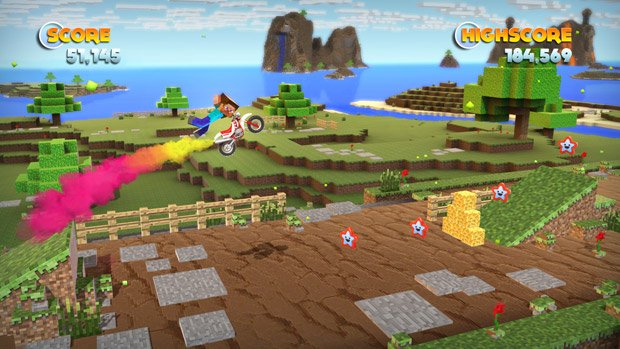 Joe Danger and Joe Danger 2: The Movie will be out on Steam starting June 24. The ability to share levels through Steam Workshop sounded like the real draw until I heard about Hello Games’ collaboration with Valve and Mojang, the results of which can be seen in this new trailer. I’m a total sucker for crossovers, even if they’ve been done time and time again.

“Lately pretty much all of us have been playing on our PCs more than our consoles, especially at lunch, and you know that means Team Fortress 2,” writes Hello Games. “Like, we’ve clocked up over 4000 hours in it between us and have so many hats. Just for fun Aaron started adding TF2 characters into Joe Danger and I was in love with how good they looked. We completely had to make them happen for real, so we called Valve, and now it’s a real thing!”

The entire Team Fortress 2 lineup is playable, as is Minecraft‘s The Player (aka Steve) and Pigman. The latter game will also introduce block-filled levels to Joe Danger. A fun little bonus for PC players, to be sure.