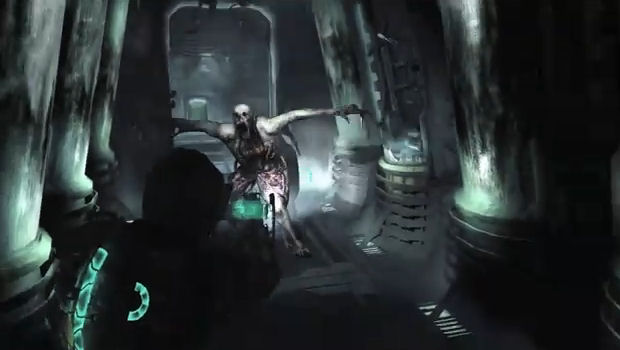 A demo for Dead Space 2 was released on Xbox Live/PSN yesterday, and all good people downloaded it immediately. The first game scared me so much that I kept doing little rabbit poops from out of my puckered browneye, so Dead Space 2 has a lot to live up to.

Naturally, no demo is complete with some Jimpressions, so why not see what I thought of the game as if my opinion matters? Oh, and do thank Nick Chester for providing the game footage!

According to the demo, it’s well on its way. Yes, the scares are cheap and sometimes predictable, but people who pretend not to enjoy a good “boo” scare are liars. With Necromorphs faster and more brutal than ever, even when the jump has been had, the panic induced by simply fighting them is kept on the high setting at all times.

Speaking of the Necromorphs, the demo alone seems to imply they’re more varied — and disgusting — than before. The demo gives us regular Necromorphs, scary children, messed up Unitarian priests, those things with the exploding arms, and large-clawed creatures that drag themselves around. I imagine that’s just a taste of what’s coming.

The demo had a few sound issues for me at the beginning of the level, with audio cutting out, but hopefully that’s not indicative of the main game and it only happened briefly. The majority of the demo looked and sounded great, with Visceral continuing the high focus on spooky audio that made the first game such a terrifying success.

With Dead Space 2 set in a city, I was hoping for larger environments, but the demo was very corridor-based and featured areas that could easily have been on the Ishimura. Towards the end of the demo, there are windows that show off the entirety of the city in the background, and these are quite impressive, and remind me of looking out of the tubes in BioShock to see the outside of Rapture. Hopefully the main game opens up a lot more.

Dead Space 2 is looking like it’ll be an incredibly worthy follow-up to the original game. It doesn’t look like a great deal has changed, simply expanded, and that’s fine. Not a great deal needed changing. I’m definitely looking forward to playing the full thing after that demo, that’s for sure.