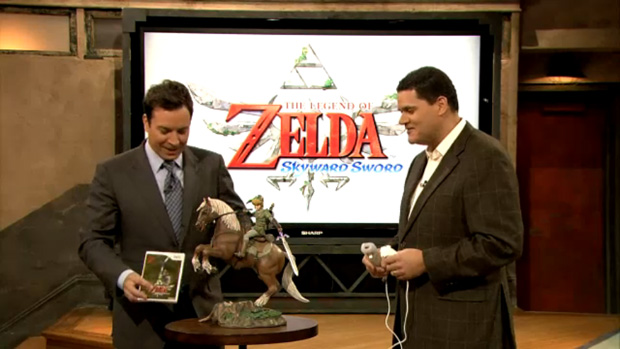 This week on Late Night with Jimmy Fallon, Reggie Fils-Aime once again made a guest appearance, this time to showcase The Legend of Zelda: Skyward Sword. Not only did Jimmy get some early playtime alongside the Meat Man, he also received a special video message from Zelda series producer Eiji Aonuma and Nintendo composer Koji Kondo. In addition, he was gifted one of the first molds of First 4 Figures’ Link on Epona statues, which won’t be made available until next year.

How does Jimmy repay this undeserved generosity? He swings the sword around like a spastic chimp and ignores all of Reggie’s gameplay assistance! I would kill to get my hands on a $425 figurine for free, Jimmy! You don’t deserve that statue, Jimmy! You are making my cry into my Cheerios, Jimmy!